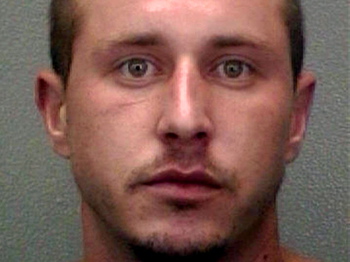 The things that Matthew Magnus likes to get up to in his spare time.

Howdy, have you met Matthew Magnus yet? How about your kids? Well, if they haven’t they’ve been spared. Why you wonder? Well- let’s just say this, if a huge white laced penis dangling in front of your 9 year old is appealing we’d like to know about it.

NBC Miami:The 30-year-old was arrested this past Saturday after police said he exposed himself multiple times to both adults and juveniles, asking his victims: “Have you ever seen the biggest penis in the world?”

According to a Hallandale Police arrest report, in the first incident, Magnus asked a group of kids the question before pulling his pants down. When the kids ran away, he found another group of kids and followed them, again asking the “biggest penis” question. The kids ran away before he could expose himself again.

Interesting. I wonder what we would have said if he asked us the same question? “Hey Matt, do you mind a moment while we go out to the hardware store and buy ourselves a measuring tape?”

The children, all under 16, identified Magnus in a photo line-up, according to the report.

When police went to arrest Magnus, they found him naked in his apartment. Police said the apartment was covered in dog feces, urine and trash, and when they did a search, they found white powder in baggies, which later tested positive for cocaine.

Mmh, over grown penises, cocaine, why weren’t we invited to this party? Oh that’s right we were out buying measuring sticks to make sure Mangas had the biggest conchello known to mankind.

Gawker: He is being held on $26,000 bail, and has been charged with two counts of exposure of sexual organs, and possession of cocaine and drug paraphernalia.

Magnus was obviously undeterred by the rumored side effects of cocaine use.