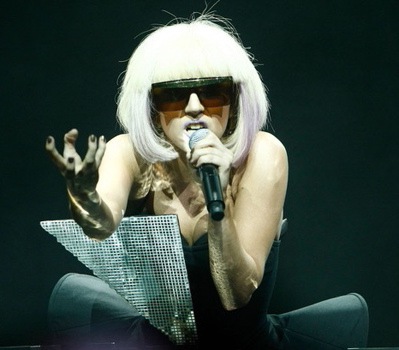 During her sold out “Monsters Ball”  concert at MSG earlier this month, Gaga touched us all she paused to take in reality (pinch me).  “My name is Lady Gaga and I used to sit right over there, *pointing* way far in the back and way up top.”

Although we felt the love in the Big Apple, trouble brewed outside of Gaga’s St. Louis, MI concert over the weekend, when anti-gay protestors attempted to rain on her gay pride parade.  Gaga, who has posed on the cover of Out Magazine and openly supports gay rights, took to the twittersphere to convince her fans not to give into hate activists.

“Be inspired to ignore their ignorant message, and feel gratitude in your heart that you are not burdened or addicted to hate, as they are.”

“They can’t scare me, if I scare them first”

She doesn’t care about nasty rumors, that you might be offended by her “Alejandro” video and shocked by her fashion statements, but name one artist who’s “made it” that did.  Go on and hang from a rope while fake blood drips down your lifeless body during your MTV Video Awards performance, play the piano with your feet, wear police tape, fall from a balcony and come back rockin’ crutches and a wheel chair- just continue to push limits.  Don’t stop inspiring the world and spreading the love, for yourself and your fans.