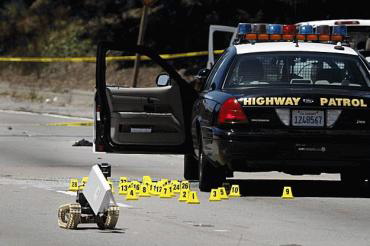 How to spend your summer Sunday afternoons.

It’s time to meet renegade parolee of the week Byron Williams. And when we say meet, we really mean quickly duck down as the skies ran with bullets over your head. Does Byron sound like the type of demented guy you’ve been dying (literally right?) to meet. If so, reach for your revolver and shoot back, cause Byron Williams is coming your way.

Byron Williams of Groveland (Tuolumne County) was taken to the emergency room at Highland Hospital, where he was in stable condition.

Angry at left wing politicians. Not the right wings too? Personally we’re also angry with all fascist leaders, dictators, Mussolini, Hitler, even Julius Caesar, but as of print we’ve yet to look for our rubber bands and sharp pointy pencil sling shots. But yes we can see why Byron was mad at left wing politicians, as the article below illuminates for us.

The incident started around midnight when two CHP officers tried to stop a white Toyota Tundra pickup that had been speeding and weaving in and out of traffic on westbound Interstate 580, said CHP Officer Sam Morgan.

The officers used a loudspeaker to direct the driver off the freeway, but he stopped on I-580 west of Grand Avenue, Morgan said.

As officers walked toward the pickup, they saw the man pick up a handgun and open fire on the officers, police said. The officers said they returned gunfire and radioed for help.

Three CHP vehicles had their windows shot out, but no officers were shot, police said. They said the driver was armed with a rifle and a shotgun as well as the handgun and fired at least two of the weapons during the shootout.

Wow, that some shoot out over there. It sounds like Byron was going to start with the Terminator in LA first then make his way to Washington and look for Bill Clinton in one of those Ronald McDonald stores he likes to go. I know, I know, Arnold isn’t left wing, he’s neo nazi, but in politics that all comes back to being the same. Don’t ask us why, it’s in all them history books no one reads anymore (except for us).

Williams’ mother, Janice Williams of Groveland, said her son had been living next door and taking care of her father’s house and land. She said he had been released from prison about 2 1/2 years ago after a felony conviction, which she declined to describe, and had almost completed his parole.

“He hasn’t been able to get a job because he’s an ex-felon and nobody will hire him,” she said.

She said her son, who had been a carpenter and a cabinetmaker before his imprisonment, was angry about his unemployment and about “what’s happening to our country.”

Which is a backhand way of saying that Byron secretly wants to be a left winger martyr, hence all the heavy explosives and shot guns. And when mom says she’s reluctant to draw on her son’s previous conviction, is that because she’s embarassed to announce to the world he’s an ‘unemployment freedom fighter?” Really, more people ought to give more respect to unemployment freedom fighters. I know we do.

Janice Williams said she kept the guns because “eventually, I think we’re going to be caught up in a revolution.” But she said she had told her son many times that “he didn’t have to be on the front lines.”

She said she had no explanation for his actions.

Mama, take it from us Byron wanted to be an unemployment freedom fighter. So next time I go down and cash my next unemployment check I’m going to have a minute’s silence in honor of your son Byron. Thank God for revolutionaries!