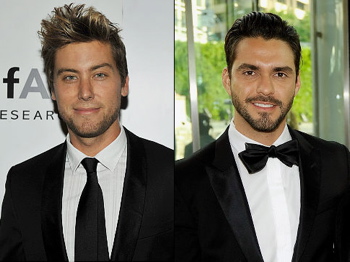 The tears are now overflowing in the boys locker room.

Personally we’ve been calling all our gay friends trying to figure out if Marc Jacob’s recent ex- Lorenzo Martone is on the rebound and seeing uber hottie Lance Bass. The thought of these two pinching each other’s back pockets and giggling over Captain Crunchie cereal in the morning is too much for us to bear. Thankfully we can consult our favorite journalists over at NY Trashbag Post (kidding Richard…) to see if the rumors are true. Let’s hold hands and find out.

NY Post: Friends of Lorenzo Martone and Lance Bass say the relationship isn’t as hot and heavy as rumored. Reports swirled this week that Martone, Marc Jacobs’ ex, and the former boy band singer were seeing each other, and have been spotted in Miami and on dates in New York.

Not hot and heavy? Are these two kidding us? Are we to believe they’re just dreamily looking into each other’s eyes as Doris Day plays in the background? Their tongues and fidgety hands deep in their pockets? The sweat dripping off each other’s bodies into the abyss instead of into every empty pore of their bodies?

Sources in Martone’s camp claim Bass is more into Martone than the other way around. “Everywhere Lorenzo goes, Lance follows, it’s obsessive,” said one source. “Lorenzo was in Miami with his business partners for Swim Week, staying at the W Hotel. Then Lance shows up in Miami and stays at the Mondrian. It was really weird.” Bass’ friends insist he planned the trip to Miami well in advance and barely saw Martone because he was working.

Personally we think obsessive love is the best way to go. The  continual phone calling, the coincidental run in at the laundromat, the health spa, the basement. It’s clearly a selfless act of devotion on Lance’s part. We’re even betting one day when Lance steps out of the shower, Lorenzo will spy a little ‘I love you Lorenzo’ tattooed on his tricep, which will elicit Doris Day to feint in the background and for Lorenzo to take off his tank top and reveal ‘I love you too Lance,’ tattoo.

“They’re seeing each other casually. But it’s not a boyfriend situation yet.”

In other words it wont be a boyfriend boyfriend thing until the ink on the tattoos completely dries off.