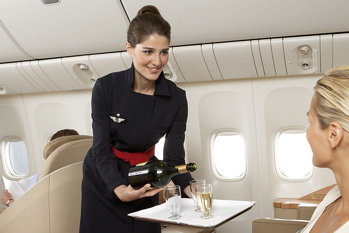 Landing in your preferred location with less money and diamonds than you started with.

Ever wondered whether you can trust the airline steward as she tucks you into sleep on those long distant hauls? No- well, there maybe a reason why- it’s called Lucie R.

ABC News: For months, the 47-year-old flight attendant, whom authorities would identify only as Lucie R., had been suspected of stealing jewelry and credit cards from sleeping business- and first-class passengers on her flights.

An investigation launched in January after five Japanese passengers on a Tokyo-Paris bound flight filed complaints with French police, alleging that money had been stolen from them during their flight. The total missing from all five passengers was 4,000 euros (about $5,150).

Of course once you get away with these missions you just don’t stop at one time. You go for it again at least a number 27 more times….

When police arrested Lucie R. at the airport, she confessed to a total of 27 passenger thefts, according to the Synergie police union.

But investigators suspect the flight attendant of many more burglaries, including the pilfering of wads of euros, Japanese yen and Swiss francs, along with designer watches, jewelry and credit cards. Dozens of victims have filed complaints after night flights between Paris and Asia, with most of the alleged thefts occurring on the Paris-Tokyo run.

Which brings the question why was Lucie R doing all of this in the first place?

“She had a lifestyle far too extravagant compared to her income,” Nebot explained. “Investigators quickly realized that she had made important cash deposits into her bank account following the thefts, and that these deposits had come after her bank account was in the negative.”

Who could blame Lucie? There she is 30 000 feet up in the sky feeding strangers caviar and champagne when Lucie reasoned that they were no different from her and if they could enjoy in their particular wealth- why couldn’t she? Who knows after a while maybe Lucie even confused herself for her clientele. Never mind for the next ten years she’ll be locked away somewhere where she’ll have to get used to the idea that the prisoners are her new clientele.