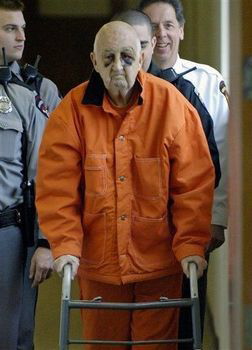 The horrible things people are doing to each other in retirement.

It’s time to meet John Bunz because John wants to remind you just because people get old, it doesn’t necessarily mean violence is never an option. Here is John’s story. Please take out your hammers too…

John Bunz was initially charged with murder and pleaded not guilty in March, after police say he murdered his wife Virginia, 89, in their home on March 21

In the guilty plea before State Supreme Court Justice Russell Buscaglia,  Bunz admitted that he bludgeoned her with a hammer.

Bunz could face a maximum prison sentence of 25 years in jail, when sentenced in September. Had he been convicted of the full-blown murder charge, life in prison was a possibility.

Which makes us wonder, why did Bunz kill his wife now? According to barstoolnyc.com the couple had been together for 68 years. One would think that after the first 6 months one might survive being a couple with each other. Granted by the 5th year it’s probably a notch on the wood block to have had a few high heels thrown at you and vice versa, and by the 25th year even the occasional humiliating fall out in front of the grand kids, but by the 68th year, your in it for keeps. The sign on the window sill even tells you explicitly “after the 68th year this relationship is for keeps, no argument, dent, foul language, stalled ignition will be heeded. Under no circumstance will you get your money back. Your guarantee has most definitely run out!”

Anyway one look at Bunz and you could tell his going to be a dead man give or take another 3 weeks. One can only think he harbored her death all these years and decided now would be better than never.

A futile death really, for Mr Bunz and his wife. Why do old people still have to be violent like the rest of us?