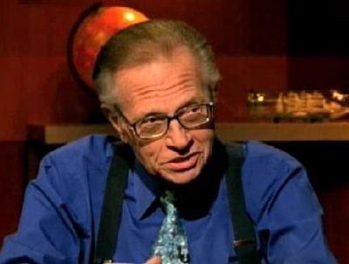 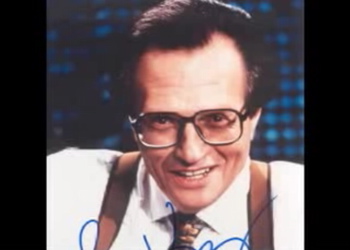 It might be a long time before we see Larry King strutting with his signature suspenders in the near future. Why? Because the old geezer has finally called it a day. The following is an excerpt of Larry’s speech as he took to his show earlier this evening. In the event you can hear members of the audience whimpering uncontrollably, that would probably be us…

Before I start the show tonight, I want to share some personal news with you. 25 years ago, I sat across this table from New York Governor Mario Cuomo for the first broadcast of Larry King Live.

Now, decades later, I talked to the guys here at CNN and I told them I would like to end Larry King Live, the nightly show, this fall and CNN has graciously accepted, giving me more time for my wife and I to get to the kids’ little league games.

Oh Larry you silly goat, you know you’ve got us blushing deep in the audience. Of course we all know the real reason why you’re leaving is because you’ve become a real messy eye sore lately and the Mrs still wont leave you alone for that messy business of boning her sister. Shucks Larry, can’t see you us blushing from here?

I’ll still be a part of the CNN family, hosting several Larry King specials on major national and international subjects.

Larry, what is it with these long winded statements. It’s okay, it’s fine, you’re allowed to retire and continue boning your Mr’s sister behind closed doors, please don’t try explaining there will be special programs. Really, the tears are just flying now..

I’m incredibly proud that we recently made the Guinness Book of World Records for having the longest running show with the same host in the same time slot. With this chapter closing I’m looking forward to the future and what my next chapter will bring, but for now it’s time to hang up my nightly suspenders.

Larry when I lay my head on my pillow tonight I will be crying uncontrollably, for all the stories you broke, the comfort you offered me, the scandals your revealed, the kind words of wisdom you offered me through the Tv set and for one of the most memorable media debacles in recent memory staring you- God bless you Larry.

Will Hollywood survive with the knowledge that Larry King has just filed for his eighth divorce?

Who can we trust to succeed Larry King as the king of Media Drivel in the event he retires?

Is there a chance that Larry King should take a long term vacation to work out if he’s gone beyond decorum?

Larry King wants to find out if Michael Jackson was a human being or an android?

Should Anderson Cooper have shared a tear drop with Larry King?