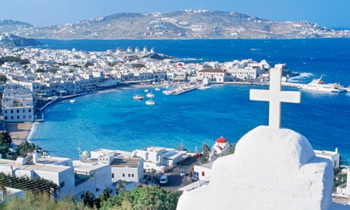 It wont be long before half of Russia and China will be partying it up in Mykonos.

Life is pretty tough these days in Greece. With huge a debt burden over their shoulders the Greek government has been forced to think of some clever initiatives to ease their debt burden. One of those ideas (you can thank the Germans for this one) has been for the Greek government to begin to sell many of the 6000 islands that dot the Meditteranean. Sounds like good news? Wait until Lady Gaga buys Mykonos…

Now Greece is making it easier for the rich and famous to fulfill their dreams by preparing to sell, or offering long-term leases on, some of its 6,000 sunkissed islands in a desperate attempt to repay its mountainous debts.

The Guardian has learned that an area in Mykonos, one of Greece’s top tourist destinations, is one of the sites for sale. The area is one-third owned by the government, which is looking for a buyer willing to inject capital and develop a luxury tourism complex, according to a source close to the negotiations.

Potential investors also looking at property on the island of Rhodes, are mostly Russian and Chinese. Investors in both countries are looking for a little bit of the Mediterranean as holiday destinations for their increasingly affluent populations.

Personally, we are wondering if that includes the occasional dictator by way of Iran or North Korea who will be checking into their new five star pensione courtesy of the Greek government or can we expect to see someone like Lady Gaga buy half of Mykonos out and turn it into a 24/7 committed freak farm?

In its battle to raise funds, the country is also planning to sell its rail and water companies. Chinese investors are understood to be interested in the Greek train system, as they already control some of the ports. In a deal announced earlier this month, the Greek government also agreed to export olive oil to China.

Export olive oil to China, while China exports computers, electronic goods and cars to Greece. That sounds like a great plan to help Greece out.

Property prices have fallen between 10% and 20% since the May riots in Athens, as bad publicity has drawn visitors away, Perdikaris said.

But we’re sure once word gets out that Lady Gaga is buying Mykonos even the hedge funds themselves will go bullish on Greece. Sort of.