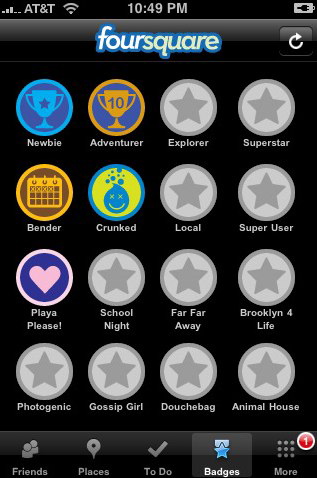 “I have twatted.” – Stephen Colbert (Interview with Meredith Vieira, 2009)

If I don’t  “check-in” somewhere, am I nowhere to be found?

I’ve barely taken 2 steps into an establishment and already checked-in on Foursquare, setting off a chain reaction of my whereabouts so detailed, even the FBI couldn’t dream up a better tracking system.  Everyone connected to me online is clued into where I eat, sleep, work, shop, workout, hang out, travel and even how I got there (see MTA Subway/every stop possible).

From the “despicable and lowbrow” checking into some random guy’s pants, to the “highbrow and brilliant” checking in to a Krispy Kreme drive-thru and displaying a shout out, “Damn right the light was on!”

Thinking we are simply taking part in what “all the kids are doing” has led to a slew of controversy. Take the Please Rob Me website which compiles information from twitter (via foursquare) of users who have checked into a venue and therefore NOT AT HOME with the disclaimer: “our intention is not, and never has been, to have people burgled.”

10 check-ins within a 12-hour time frame will award users with the “over share” badge and a ticket to “over exposed anonymous.”  I’m guessing a 12-step program weans off the obsessive-like need to check-in (sans “off the grid”) to places like Dr. 90210’s for a nip/tuck on your lunch hour or the Motel 6, because you had a bit too much fun during Fleet Week.

Those things best kept to yo-self.

I’m running TweetDeck on my MacBook, so a news ticker basically threw up all over the screen. Real-time means the tweets don’t stop, ever.  That is, unless the “fail whale” makes an appearance.

I’m overwhelmed trying to keep up, yet can’t stop checking updates. If it wasn’t for lists and columns to de-clutter the mess, taking any of it in would be a miracle.  I’ve decided that using Twitter is the equivalent of diagnosing yourself with ADD.  It’s bad enough I’ve started using hashtags as part of the alphabet, even when conversing offline. #wtf

Regardless of its impact on the human race, I’m constantly thinking about my next tweet and how it could possibly provide me with tiny increments of satisfaction, once filled by direct human contact and telephone calls. Tweeting has been criticized as nothing more than “shouts into darkness,” yet like blogging, which I used to enjoy years back, if one person is reading (Hi Mom!), that’s good enough for me.

Twitterphoria!  So and so is now following me. So and so may be just another notch on my bedpost, *evil grin* but having followers means having fans.  It’s ok that we’ve never met (and you live in Croatia), thanks for your support.  Why yes, I will tweet more often, given that you care so much.

It’s no surprise that influential, famous people and companies have the massive following that they do, but for the “Average Joes” like myself, every follower represents the opportunity to become increasingly influential in their line of work. Listorious, the “definitive list of who matters on Twitter,” along with Mashable, rank heavy hitters in various categories from celebrities to social media and the statistics matter.

I find plenty of content direct from TweetDeck notifications; (menacing distractions?) overdosing on links, keywords and hashtags- each providing a temporary fix, but every second apart from the twittersphere leads to separation anxiety.  Luckily, the advent of the iPhone app means never having to say goodbye to any of it- at least until the #intervention.