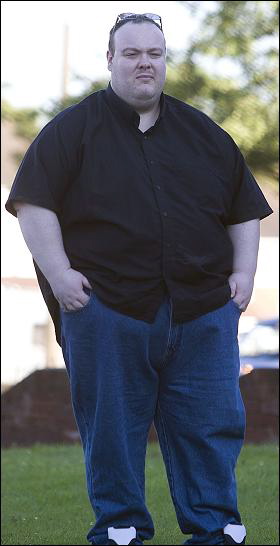 The despair and humiliation, and the missed flight to see his dying aunt.

Some rules are horrid or just plain brutal. Obviously they exist to enforce certain codes, but sometimes special mitigating circumstances ought to be considered. That said, tonight Sandy Russell is a devastated man and there was nothing he could do….

News.com.au A 203kg man who says he was thrown off a flight for being too fat has missed the chance to say goodbye to his dying aunt.

Sandy Russell, from Wolverhampton in England, said a stewardess told him to leave the Air Transat plane from London Gatwick to Toronto because he could not fit in his seat.

He was told he must pay for two seats if he wanted to catch the next available flight to visit his aunt who was dying of bowel cancer in Canada.

Mr Russell was unable to pay the $1564 fare and his aunt died two days after he was due to visit her.

One could argue Mr Russell should have been aware of such provisions and made arrangements to acquire two seats before booking his flight, or perhaps even had called authorities and explained authorities to explain his tenuous circumstances. But then again, perhaps Mr Russell had no clue that certain regulations were enforced until it was too late.

Air Transat said Mr Russell’s 52-inch girth meant that the armrest could not be lowered for take-off, as demanded by regulations.

The passenger said he was angry he wasn’t made aware that his size was a problem before he boarded the plane.

A spokesman for the airline said Air Transat was not allowed to ask passengers their measurements before they booked a flight as it was “a breach of their human rights”.

A valid thought no doubt. After all airlines must comply with standards as must passengers, even if unfortunately they had no idea of those standards in the first place. After all how fat do you have to be to be denied a seat and a chance to say a final good bye to your aunt?

What a horrid series of events indeed.