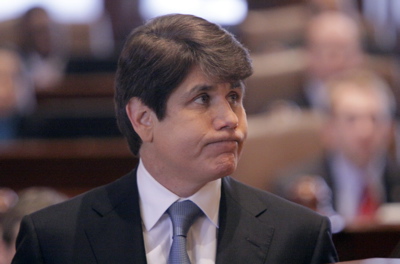 Life is no longer going well for Rod.

It seems things are starting to overwhelm Rod, our favorite politician indicted on the take who for some reason has confused court proceedings for a celebrity show that he is staring and we the world are anxiously panting to watch. That said, since Rod desperately wants his life to become a celebrity show let’s examine what last happened on the Rod Blago- bitch show.

Illinois’ alleged horrible criminal ex-governor, Rod Blagojevich, is very excited for the start of his corruption trial, which he’s been promoting on television and radio since forever. Is he actually going to tweet nonsense throughout the trial? What a muppet.

But there was a hitch- as soon as Rod started twittering to the world the judge looked at him and asked him if he realized if he was in a courthouse to which Rod Blago-bitch replied that the judge was in fact partly correct- for he was also starring unwittingly in the Rod Blago-bitch show. The judge thought about this for a while, watched 2 mosquitoes make out near the base of where Rod kept his apples for the jury members and then cautiously warned Rod Blag o bitch that if he continued to behave in such a way he would be in contempt of court. That’s when Rod Blago- bitch came up with a new plan- facial twitching. Which led to the following:

After banning Rod Blagojevich from tweeting from the court room Monday, the judge in his corruption trial has now “admonished” him “to avoid making any facial or other expressions” during proceedings, which he had been doing, annoying jurors and prosecutors.

One day when Rod Blago bitch is off the celebrity channel and nibbling on his prison food and plaintively watching two mosquitoes make out near his milk box he will desperately cry and realize that he must seize the day- but of course we will have to wait for the next 17 episodes of the Rod Blago bitch show before Rod slowly realizes what is at stake.