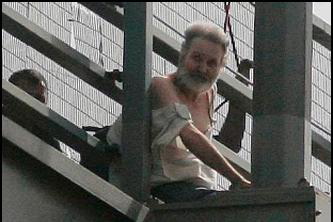 Prompted by passing motorists to jump.

Sometimes it’s a hard thing to find empathy in the world and when the mob factor kicks in then even humanity means nothing.

A suicidal man who suffered from an agonising skin condition leapt to his death from a bridge after motorists shouted ‘jump’, an inquest heard.

Paul Cowling, 59, told officers he wanted to kill himself because of the horrendous skin condition which he claimed health services refused to treat.

Which reminds of us a situation here in the US after Kathy Myers of Michigan chose to shoot herself in the shoulder because she couldn’t afford medical attention and emergency medical units would only give her anti inflammatory pills still rendering her in pain and with little recourse. Of course Mr Cowling went the extra distance. Particularly passing motorists during the 7 hour stand off over Avonmouth Bridge, Bristol, would hurl abuse at him and at one stage began to jeer for him to jump with lorry trunks honking in unison.


Described as a ‘gentle recluse’, the inquest heard Mr Cowling told a police officer the skin condition left him unable to eat and the only things he could bear to put in his mouth were ice cubes.

Firefighter Derrick Hone tried to haul Paul to safety using his belt as leverage as a cup of tea was passed to him, but then watched in horror as the man hurled himself 100ft to his death.

How cruel is life when the whole world is against you, even your own body which refuses to cooperate.

Paul, who was unemployed and lived with his brother David, in Bristol, had suffered from an undiagnosed skin condition for several months.

Security supervisor David said his brother, who he described as a ‘gentle man’, slept on a sofa because it was too painful for him to lie down.

To the observer it may appear as a series of unfortunate events, but to an afflicted human being struggling with his body, an unrelenting public and the decay of his mind how can anyone of us express surprise that it all came to this?

PC Antony Henley, of Avon and Somerset police, said: ‘I asked Paul why he wanted to kill himself and he said no one would listen about his neck, which was red and sore.

How nice it is once in a while to be heard and understood and how brutal it is to be misunderstood and consigned as a malfeasance to society. How cruel indeed…