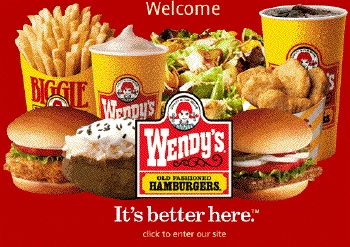 How to react when the counter boy/girl screws up your order.

We know how it is. You’re hungry, the lines are long and all you want to do is just get your order and eat the damn thing. Well if only it was always that easy...WoodTV out of Kalamazoo, MI explains for us…

KALAMAZOO, Mich. (WOOD) – Two people have been arrested after officers say they hurled food and soda at a fast food employee Saturday, who then threw it back at the customers.

Kalamazoo Public Safety Officers tell 24 Hour News 8 around 12:17 p.m. they received a call of a large fight at a Wendy’s fast food restaurant on Portage Road.

Doesn’t this remind you of dinner at home with the family, when your bitch brother or sister would get out of line and you’d throw the first of many veal schnitzels in their face…

Upon arrival, officers encountered a “loud disturbance between unsatisfied customers and frustrated employees,” according to a press release from KPS.

I remember once ordering a junior burger at Mcdonald’s without the pickles (because Scallywag can’t stand pickles) and the damn bitch turned around and told me to take them off myself.

Authorities believe as the customers tempered increased, fountain beverages, hamburgers and fries were all hurled through the drive-thru window. The food and drinks struck an employee inside the restaurant. The employee then threw food items back out at the vehicle, hitting it with soda, ketchup and fries.

Of course instead of hurling the pickles back at the bitch, I just gunned her down with a long stare whilst I took the pickles off the bun there and there in front of her, placing each damn pickle on a separate napkin so she could see for herself the grief she caused me- bitch!

Two of the customers in the vehicle then went into the restaurant and began fighting with employees, where police said both punches and chairs were thrown.

Of course I could’ve called one of the interns and we could’ve started a mad brawl with that ‘pickel bitch,’ but all my interns are as poor as fuck and I’d have to buy them a burger afterwards.

Wendy’s employees told police that the incident stemmed from a communication breakdown that could have been easily rectified had the customers been civil.

Bitch ever serve me one more burger with pickels ever again, I’ll break her neck!