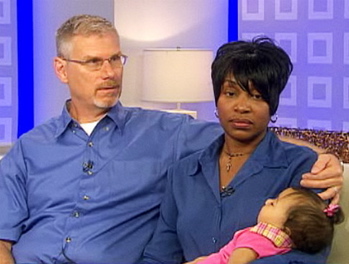 I’m definitely not a little devil, but I’m no saint either, apparently you have to be one in order to work at Southland Christian School in St. Cloud, Fla.

Her name is Jarretta Hamilton and she’s a sinner. So what did she do that got her fired from her job as a teacher? Something I enjoy doing almost every other weekend, have pre-marital sex!

That’s right folks, Hamilton and her husband of 16 months, Samuel Treftz, were guests on the TODAY show to tell their story about how Hamilton was fired after telling the school’s principal Jon Ennis, that she had given birth to her newborn daughter Sarah three weeks before she was able to get a ring on her finger.

She requested the normal 6 weeks off for maternity leave and that’s when Ennis decided to get all in her business saying, “I’m just trying to do the math here. When did you get married?”

In which Hamilton was taken back by his nosey antics but replied truthfully which is when Ennis figured out that she gave birth before she was able to walk down the aisle. One week later she was terminated based on a “moral issue that was disregarded, namely fornication, sex outside of marriage,” reads the letter she received from the principal.

What the hell it matters what Hamilton or any teacher that just so happens to work at a Christian school, does during their time off is nobody’s business.

Hamilton told TODAY’s Ann Curry this morning her getting fired violates federal anti-discrimination laws. She’s also suing principal Jon Ennis for not only being so damn nosey but also putting her business out on front street to the other teachers and even parents of her students. Gosh, why didn’t he just put an F on her chest, or maybe W- HORE for pre-marital sex.

When principal Ennis learned of Hamilton’s lawsuit against him he wrote in a letter, “We request that Jarretta withdraw her complaint and consider the testimony of the Lord.”

I don’t think the Lord would be too upset with Jaretta. He’d probably sue Ennis too!