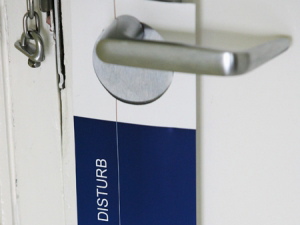 Do not disturb or else.

Here comes an interesting story courtesy of the town, Minnertsga – Holland. Of course it raises more questions than it answers but then again even small towns are allowed their share of freaky stories…

Expatica NL: A man who told the rest of his family he wanted to be left alone lay dead in bed four years – without anyone noticing, the Leeuwarder Courant reports on Wednesday.

The man, who was 50, apparently shared the terraced house in the village of Minnertsga with his sisters aged 71 and 44 and brothers aged 61 and 67.

In 2006, he told his family he wanted to be left alone in his room and no-one disturbed him until this week.

Has your mouth dropped to the bottom of the floor yet? Can someone really lie dead for 4 years without being missed once? What about the man’s relatives? Did they not think twice to knock on the door and wonder if he would like some left over dinner, to say hello to the latest house guest? And what about the smell of him decomposing? Didn’t that waft into the living room at any stage? Or what about the fact that he never left his room to use the toilet or grab a bite? Are we suppose to believe he had a portable toilet under the bed and a self sufficient kitchen under the floor boards? And how long was he dead? Did he just die the other day, the day before he knew the landlord would finally drop by and ask for all those missing rent payments?

“He was used to being obeyed and very quick to anger,” police spokesman Wouter De Vries told AFP. “Four years ago he told his brothers and sisters he didn’t want to be disturbed and went to his bedroom.

Though they frequently passed by the bedroom door, no one dared to open it and look in, de Vries said. The body was only discovered when the landlords decided some work needed doing in the room.

Of course there are days when we all went to be left alone, but being being left alone for 4 years sure takes the cake. I bet he had one of those hidden under the floor boards too…