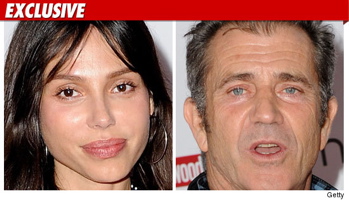 He said, she said…

Welcome to the Mel Gibson and Oksana Grigorieva ‘Punch and Judy,’ show. In the latest celebrity scandals to make the summer headlines, Russian girlfriend to Mel Gibson is accusing the star of using violence against her, while Gibson himself is denying said allegations and has already gone to court to force Grigorieva to stop publicly discussing the details of their relationship- a wishful thought considering Grigorieva is dead broke and is looking for a huge payday, and not to mention the field day most tabloids are having with this ‘fun’ story. That said, it’s time to try and make sense of the latest celebrity ‘he said and she said’ show.

TMZ: Sources connected with Gibson have told TMZ the actor did not get violent with Oksana during their January 6 confrontation, although they admit things did get physical. A source connected with Oksana, however, says, “Mel and his camp are spinning the facts in a desperate attempt to protect his reputation.”

Sources in Oksana’s camp say Mel’s people are lying when they say she shook the baby. Instead, the sources say, “She tried to protect the baby during one of Gibson’s violent episodes when he punched Oksana in the face two times, breaking her teeth and giving her a concussion.”

So in one corner you have the deranged madman star prone to fits, while in the other you have the deranged Russian ho who is intent on splashing the inner details of her relationship with the huff and puff actor in the hopes of inducing public sympathy and of course now that they are split a nice pay day. The type of stuff that undoubtedly we all can’t wait to salivate over when we realize that our world means nothing without our daily recourse to celebrity melt downs…But of course the question remains, which ho is telling the truth?

As one source put it, “She tried to protect his reputation, despsite her fears of him and his verbal and physical abuse.” And the source goes on, “She regrets having believed in his empty promises to obtain professional help to control his violent nature.”

But Mad Mel wont have any of that. Michael K of D listed explains blasphemes for us:

But Mel’s people are still saying that OctoSana’s tongue keeps launching lies, because none of that happened.

OctoSana also spoke to The Daily Mail about what’s going on. OctoSana says that she left Mel to protect herself and her child. She claims that she is dead broke, “There are so many lies being said about me. I was trying to keep things dignified and be respectful to the father of my daughter, but what he is doing is cruelty. I am having to live on credit cards and borrowed money. It is not a good situation.”

If Mel really did knock OctoSan’s teefs out, dental records would show that, right? Unless she yanked out her own teeth with a pair of pliers to blame it all on Mel. Naw, she wouldn’t make stuff up….or WOULD SHE?!

Which begs the question did Mel locate Oksana’s pliers and is holding onto them with blood stains and all to show the judge his really not that violent ? No matter what happens rest assured there will be more blood to come, as is usually the case in heavyweight banter titles. Enjoy your summer…