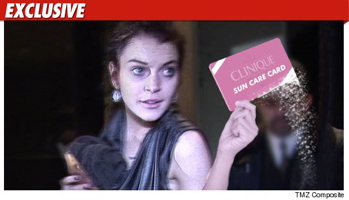 Is it possible to crush breathmints and snuff them up your nose?

Sometime in the future the world will be thanking Lilo for inventing a new of getting high, that is via the crushing of breath mints into white powdery forms before grovelling the sugar like particles like a viper up your nose. Of course before we can thank Lilo for her newest invention we first need to thank the officer who first arrested her in 2007 who came across the white looking powdery stuff attached to Lilo’s dilating eyeballs and her Clinique Sun Care card.

TMZ: Now we know why Lindsay Lohan’s 2007 DUI case may have plea bargained so quickly — the cop who took custody of the cocaine mistook it for a breath mint and threw it in the trash.

Which is like a crack dealer jumping up and down for joy when a cop confuses his bundle for a soggy golfball that just came out of a Palm Springs mineral spa.

“…according to the Santa Monica Police report — obtained by TMZ — the officer “discovered a folded Clinique sun care card with an unknown substance caked on to the surface of the card in Lohan’s right rear pocket.”

The report goes on:  “Some of the white substance fell to the floor.  I used my foot to see what had fell but thought nothing of it.  I did not recognize the substance attached to the card and initially thought the substance was a wet crushed breath mint.”

Of course one could only imagine Lilo sitting there her eyes dilating in overdrive, suggestively sucking on one of her breath mints exclaiming that it was the ‘breath mint’ that made her lose her nerve. She had after all had asked for spearmint but all the lowly store clerk dealer could come up with was the white crystal kind. A silly oversight of the clerk dealer. But it gets better…

“I put the card into the jail trash can next to the booking windows. I was looking at the floor and began to recognize the substance as resembling powder cocaine. I then recovered the card from the trash.”

In the end our heroine only spent 84 minutes in purgatory. The moral of the lesson- be careful next time you buy breath mint to crush and put up your nose, it may not always be the flavor you want…