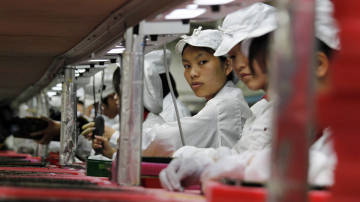 There may be a reason why China commands so much of the world trade, mainly because it is able to afford to under price most of its competitors in lieu of the considerably low wages it offers its employees. Which as we all know is a great thing for the customer but it seems a growing problem for Chinese multinationals who have witnessed many of their employees committing suicide as a result of the struggle of having to get on with life and rapidly rising essentials such as food and property.

Stung by labor shortages and a rash of suicides this year at its large factories in southern China, Foxconn Technology said Wednesday that it would immediately raise the salaries of many of its Chinese workers by 33 percent.

33 percent? That sounds amazing, but unfortunately it’s pittance. Why? Because if I am paying an employee the typical 83 cents an hour that only translates to a boost of 27 cents to make ones total hourly salary $1.10. Even in China an extra 27 cents will not get you very far at all. If anything it might even serve to further depress employees.

One of the companies that will now initiate the higher wages is called FOXCONN ( which produces electronics and computer components for Dell, Hewlett Packard and Apple,). Of course this may be a little too late if one examines the evidence surrounding its reputation, which it seems hasn’t deterred the above mentioned American conglomerates from continuing to do business with a manufacturer widely known for human labor abuses.


But Foxconn, which produces electronics and computer components for Dell, Hewlett Packard and Apple, has come under growing scrutiny in recent years because of recurring reports of harsh labor conditions at its factories, including long working hours and claims by labor rights activists that the company treats workers like machines.

Of course now that the story at Foxconn is getting prevalence the American companies have expressed concern and a desire to investigate practices of the manufacturer. Which begs the question are we to really believe that the Amercian electronic/computer makers had no idea of the prevailing labor conditions (why else after all were they getting their parts so cheap…) or is just a cynical exercise to show public concern now that the media is examining such recurring abuses? Not very endearing to say the least.

We suggest next time you buy something made in China you look for a clean cloth so you may wipe the blood away.