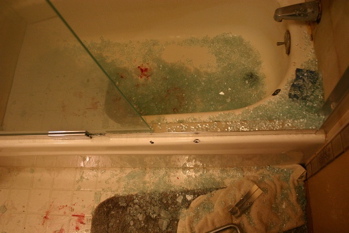 Quick, if you don’t want to die today then I advise you to slowly walk into your bathroom, better yet, get someone else to go into your bathroom and…replace your shower glass door. I’m not kidding people, this is a disaster just waiting to happen.
Feast your eyes on Bob Sullivan, a man who learned the hard way that although glass shower doors are nice to have, they’re quite dangerous. One glorious day, Sullivan was newly cleaned and ready to start his day and step out of the shower when suddenly “glass was raining down on me.” His shower door, made of glass of course, surprisingly broke into a million tiny pieces not only leaving him bloody but creating a sound that “was hideous, something between nails on a chalkboard and a torrential downpour.”
Something like this would never happen to us plastic shower curtain users.
Sullivan went on a search to find the answer as to why this happened, but he found nothing. Although his shower door was made of a special tempered safety glass, it was designed to break into small pieces making them an injury just waiting to happen!

“In my case, I was left with about 20 cuts–not much worse than paper cuts–along the right side of my body and on my feet.”
Kristine, the spokeswoman of Kohler, the company he purchased the glass from, gave Sullivan various reasons as to why it happened, “It can happen for 100 different reasons.” You’re just so useful Kristine.
She continued saying that, “sometimes a small fracture will occur on the edge of a shower door that won’t immediately cause it to shatter. Hours or days later, the door will then explode, creating the appearance of a spontaneous blow.” To those that have a shower glass in their bathroom instead of a curtain, I advise you to keep your children, pets and old family members away before it shatters on them.
Have you started dialing the number to your glass company so they can come and get that shower door the hell out of your bathroom? Well I would advise you to unless you’re ready to die, or at least be cut 20 or more times.
Source: MSNBC