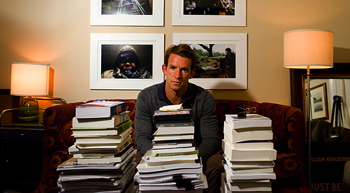 Breaking oneself down to re create oneself. Bill Cleg’s journey…

For a while in the early 2000’s Bill Clegg was the hottest literary agent in NYC. He had a motley of highly prized writers that he represented, a burgeoning literary agency(Burnes & Clegg), and a fairly glamorous lifestyle. Except his glamorous lifestyle suddenly went off the deep end, where it wasn’t just glamorous anymore but an expressway to hard core drug addiction, Brazilian male prostitutes and plush boutique hotel rooms which he turned to mini crack dens. The type of adventures one would perhaps expect or appreciate a writer capable of having, but not necessarily a book agent. 5 years later on, after having gone through his entire savings, losing his business and watching all his writers migrate elsewhere, and some serious rehabilitation Mr Clegg is now once again calling the shots. The NY Times reports…

BILL CLEGG, literary agent and recovering crack user, is pacing the lobby of the Gansevoort Hotel, a BlackBerry glued to his ear.

He takes a seat in the hotel’s sunny rooftop bar and surveys the crowd. “This is the first time I’ve been back,” he says, referring to the dark and rather sordid episode when he checked in under a fake name and binged on crack cocaine, male escorts and room-service vodka for nearly three weeks.

Which of course is just the way we like our heroes. For Mr Clegg, has somehow managed to come clean with himself, document all the torrid experiences he had and manage to eke out a $350 000 advance- which leads us to think, not bad work if you can get it.

But now it’s a memoir. After being on this side of book publishing as the boyishly charming agent for big-name writers like Nicole Krauss and the poet Anne Carson, Mr. Clegg took a less scandalous plunge into self-absorption to write a tell-all book, “Portrait of an Addict as a Young Man.” Set to be published next month by Little, Brown.

Which makes this author wonder if he should ride a hell blaze memoir about his adventures, even if they don’t necessarily involve Brazilian prostitutes (hint- they still involve prostitutes…).

There’s the first time he tried crack. (“The taste is like medicine, or cleaning fluid, but also a little sweet, like limes.”) The tryst with a taxi driver behind a 7-Eleven in Newark. (“What I want is the blurry oblivion of body-crashing sex.”) Or the time that his boyfriend, a downtown filmmaker who goes by the pseudonym Noah in the book, watches as Mr. Clegg smokes crack and has sex in a hotel room with a $400-an-hour Brazilian prostitute named Carlos. (“Shame, pleasure, care, and approval collide and the worst of the worst no longer seems so bad.”)

But as quickly as he rose, his downfall would verge on suicidal. In early 2005, after a fitful spasm of vodka, a crack dealer named Happy and an emptied bottle of sleeping pills, his life imploded. The literary agency dissolved. Rival agents swooped in and snatched his writers. And the boyfriend of eight years was gone and, with him, the Fifth Avenue party pad.

But somehow despite the odds, the self hate and descent Mr Clegg has paradoxically taken on the journey usually reserved for the clients he represents to prove there is a reason why he is one of the most well sought after agents- because simply he can go off the deep end like many accomplished writers and somehow redeem himself and become one of the pack as well.

Ten give away clues that your new room mate is a junkie.