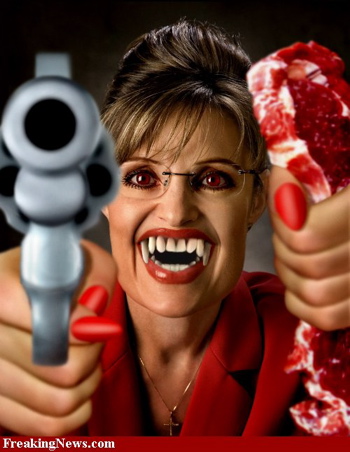 Ex Beauty Queen runner up and Quitting Governor of Alaska, Sarah Palin,  joined forces forces this past Saturday with fellow demented wing-nut Governor Jan Brewer of Arizona to convince frightened Arizonians that racial profiling is a wonderful idea that we should all be happy to adopt if we are to keep America for Americans and baby Jesus happy.

The public outcry over a tiny, new insignificant racist law ( which essentially allows authorities to pull aside a suspected spic and quickly throw them out of the country if they indeed turn out to be a spic) in Arizona has caused so much acrimony and loathing, it has mistakenly led to the boycotting of that delicious Arizona ice tea–which just so happens to be brown through no fault of its own, forced the state’s governor to enlist Sarah Palin, a woman who has steadily made a fortune out of causing loathing and acrimony.

Following the Republican wing-nut meme of blindly overlooking the myriad of mistakes and party betrayals, both fiscally and intellectually, made by former president George Bush, Jan Brewer and Palin ardently blamed President Barack Obama for the state law.

“It’s time for Americans across this great country to stand up and say, ‘We’re all Arizonans now,'” Palin said. “And in clear unison we say, ‘Mr. President: Do your job. Secure our border.'”

Interesting. During the 2008 presidential campaign, treasonous commies from cities and states that didn’t rhyme with Malaska weren’t even considered real Americans. But of course now with the new bill we’re invited to once again be real Americans…

The event, funded by Brewer’s re-election campaign, invited ‘real Americans’ to  pledge that they too we’re un mistakenly  American and that they too should stand by the new law- because as we all know spics should be avoided at all costs. In the meantime we should all stay indoors until President Obama finally comes up with his own birth certificate, because just in case you noticed he has one of those annoying accents and was once seen shaking hands with a Mexican.

Aren’t you glad that we’re all real Americans now?