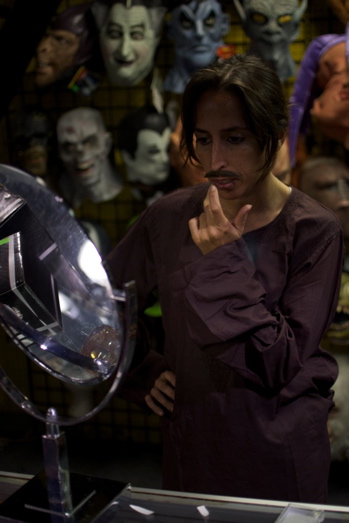 In their exhibit/performance art colloboration, Aphrodite Désirée Navab and Chervine, Iranian artists based in New York City, explore the gender stereotypes and pressures of Iranian patriarchal culture. Chervine photographs Aphrodite as she transforms herself into a Hermaphrodite, wearing a traditional shalwar chemise, mustache and turban and follows her as she interacts with the public for several weeks. Hermaphrodite 2010 critiques gender expectations at the same time the performance is also a metaphor for the condition of exile, neither here nor there, but both, neither Iranian nor American, but both.

Aphrodite the artist turns into Hermaphrodite the performer, sometimes interacting with strangers on the streets of NYC, at other times as spectacle on a stage in front of a seated audience as in last night’s performance at DCTV Firehouse in Soho (May 9, 2010: 7-7:30 pm). Against the wall, behind Hermaphrodite were photographs and a video projected from his/her earlier performances. Hermaphrodite then rolls a suitcase to the front center of the space, squatting, opening up the suitcase, spreading a sheet stamped with arabesque patterns characteristic of textiles from Esfahan, taking off his/her boots, and then proceeding to perform a private ritual. 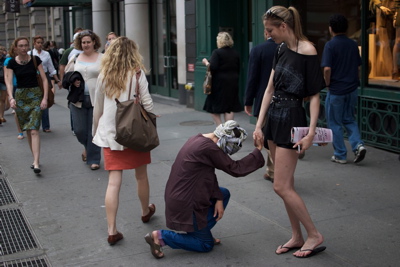 On the pages of a large turquoise and silk book, Hermaphrodite writes “Mard va Zan” in Farsi and the same words in English “Man and Woman”. S/he then tears off the sheets and places them on tables at which some of the audience were seated. Was it an existential pronouncement, a speech act, a declaration, a sheet torn from a diary, or lines repeated over and over again on the chalkboard as punishment for misconduct? Or was it an act including, at once, all of these gestures?

Hermaphrodite then brought out veiled clay dolls from Abyaneh village in Iran made by women from that village. Were these objects for sale or for play? Was Hermaphrodite selling them or were they his/her own dolls? S/he offered pages of miniature paintings and poems by Omar Khayyam. S/he put gold coins from the Persian New Year on the tables and jewelry from Iran. It was not clear whether these objects of Persian cultural heritage were for Hermaphrodite to offer to a bride or were they part of his/her own dowry and inheritance? Ambiguous, androgynous, with an internal logic of his/her own madness, Hermaphrodite worked away in a trance, posing questions without resorting to quick solutions. 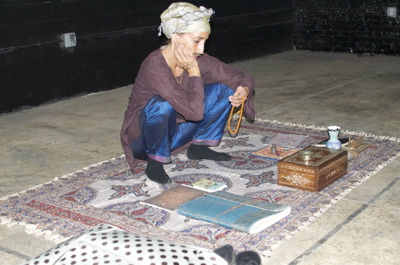 To be ‘unhomed’, as cultural studies theorist Homi Bhabha puts it, does not mean that Hermaphrodite is ‘homeless’. Nor does it mean that s/he can be accommodated easily. By occupying two places at once, a hermaphrodite is a hybrid who becomes difficult to place. It is within this ‘third space’ of working, contesting and reconstructing that hermaphrodite creates an opening for other positions to emerge.  Hermaphrodite’s performances and the resulting photographs and videos from these interventions allow for a space of ‘unhomeliness’–a space of trans-national and cross-cultural initiations.