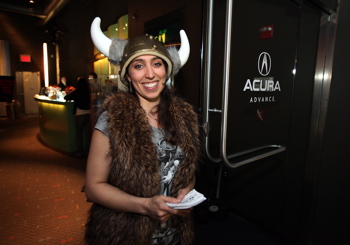 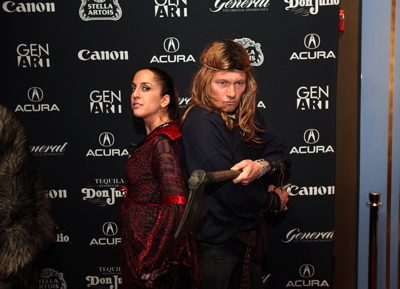 The cast of The Wild Hunt arrived en masse clothed in Medieval Fair fantasy costumes and Viking helmets shouting out battle cries as they parted the crowd of attendees at last night’s premier at the GenArts Film Festival.  Like me, the crowd didn’t know what to expect: is The Wild Hunt a comedy, a farce, or something we’d regret seeing?

But speaking to Mark Krupa, who plays “Bjorn ‘The Viking‘ Magnusson” in the film, I got some direction. He teasing out, “It’s a modern day Viking saga involving a clan family. A story about reality and fantasy colliding in the setting of live-action-role-playing.”

Mark Krupa co-wrote the screenplay with the film’s director, Alexandre Franchi, based on Krupa’s story that was originally meant as a pilot for a TV series. Krupa and Franchi researched Viking and Celtic lore “but more important was their immersion into the world of the live-action-role play “…we did spend time at a LARP (Live-Action-Role-Playing) with our girlfriends and couldn’t sleep because there were three hundred raving rabid barbarians crashing in our fake inn. It was really wild.”

Krupa didn’t want the hero in Wild Hunt to be perfect such as those in recent films like Clash of the Titans that he thinks “misses the mark in terms of really engaging you in an authentic heroic saga… becomes too much about super glitz.  Everyone’s got super powers, perfect teeth. We kind of lose the authentic, ugly, raw feel that is more mirrored in our film.”

I won’t give the film away, but the film catches you by surprise. At first you think you’re going to be sitting thru a quirky romantic comedy, but it deftly takes a few arresting turns to make you realize that ‘shit’s getting serious’ and you’re drawn in. 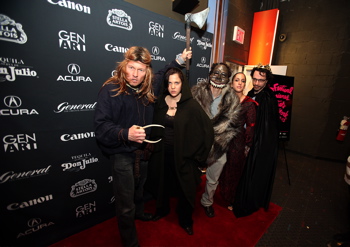