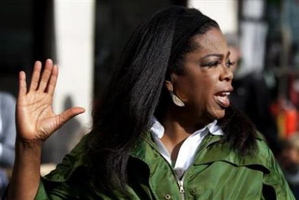 News flash for the millions and millions of housewives, effeminate males, and bored channel surfers who have grown up with Oprah – she’s full of shit. ‘I told you mom.  See, I wasn’t jealous of her undeserved success, but rather baffled as to what draws viewers to her bullshit, Bon Bon popping program.’

“Where Oprah got that nonsense about growing up in filth and roaches I have no idea,” Katherine Carr Esters said. “I’ve confronted her and asked, ‘why do you tell such lies?’ Oprah told me ‘that’s what people want to hear. The truth is boring.’” – NY Post

That’s funny, because all along I thought her and the show were boring as is.  So, all it takes is a fib about one’s childhood for success and media dominance?  Did I mention my parents wouldn’t buy me a dirt bike when I wanted one for Christmas?  Yes, this tarnished my entire upbringing. Add the fact that I was cut from the baseball team, and you’re looking at a future TV host or at least a sleazy celebrity blogger. But, enough about my career.  What’s up with Oprah’s sex life?

However, she quotes sources describing how in 1989 Winfrey paid an ex-boyfriend $50,000 to keep quiet about her gay brother and “some lesbian affairs.” Oops…

As for her relationship with longtime partner Stedman Graham, according to the book the two do not share a bedroom. – NY Post

Wait, so she might be gay?  Oprah dear, there was no need to fabricate a rough upbringing.  All you needed to do was take a page out of Ellen DeGeneres’ playbook.  Hell, you could be hosting American Idol (or maybe we could host it together because I once had a boy look at me for the longest time…)  at this point.  Does it get any bigger than that? Oh wait, I guess Oprah is much bigger than that. But hey, at least you wouldn’t be lying to the American public.  One thing show business doesn’t stand for is a liar.