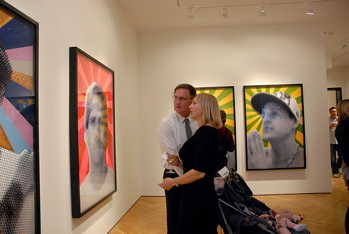 I’m at the Stellan Holm Gallery on the Upper East Side waiting for my chance to speak with the man of the hour, Los Angeles based pop artist, Paul Rusconi. The white walls that surround me are adorned with eleven 5.6 x 4 foot portraits of America’s top and most talented pro-skateboarders. Paul turns, I catch his attention, introduce myself and ask the question I need to know, “Why pro-skateboarders?”

He begins to explain the inspiration for his series. “I was at a couture show in Paris,” he says, “I believe it was Dior, and on one of the couture gowns, there was a pattern of skateboards. It really grabbed me. I thought it was so interesting.”

The portraits are beautifully executed. I ask him about the process he went through to create each one.

“I took about 10 to 20 digital photos of each of the skateboarders,” he says. I am truly surprised by this information. Each of Paul’s portraits are going for $25,000. It was hard for me to believe that only 10-20 photos needed to be taken. “It’s not about the digital photos,” Paul explains, “It’s about them [the skateboarders,] the way the light hits their face, they each have such huge personalities. I wanted to capture that.”

The photo is then digitally screened onto four different layers of Plexiglas, each layer a different color of benday dots. He uses cyan, yellow, magenta, and black. When you step back, the benday dots create a gray scale. The dots create an optical illusion, if you squint your eyes a certain way, they come into focus. The background of the portrait that lies behind the benday dots is painted in nail polish. Out of curiosity, I ask him if he prefers a specific brand?

“I once did a project where I only used Chanel, but for this series, it was all about the color. If I found a color I liked, I would order cases of it. If I couldn’t get a 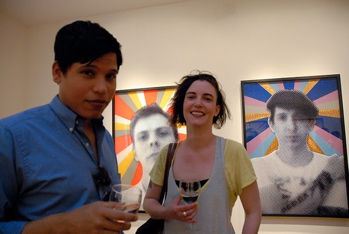