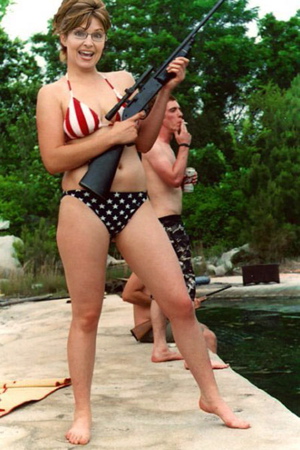 The amazing things that are now happening out of Alaska.

Until about just over a year ago if you had mentioned to anyone that people or things other than polar bears and wild salmon resided in the state of Alaska you would have been met with a sad look of knowing despair. Of course that all changed when it was brought to the country’s attention that money hungering, ambitious individuals like Sarah Palin happened to live there too.

What was once a quiet state had suddenly become by default one of the edgiest and iconoclastic states ever known to humanity courtesy of a certain individual that has managed to shock and torment left wing journalists and a God fearing public.

That said, it shouldn’t surprise anyone hat Sarah Palin, a once an unheard and uncared about individual in a very unheard and uncared part of the world has now set her mind of further robbing you of your sanity and the legacy for what now passes for reality TV.

The extortion fee you wonder? A cool $1 million per episode. Let’s read on together and try and figure the latest mess out of Alaska…

A&E Networks and Discovery Communications want to acquire Palin’s project (which she has been shopping), which focuses on the ex-governor giving a guided tour of her native Alaska — visiting fishing boats and taking a trip to a gold mine, to cite a couple examples.

On principle this sounds like one of those savory nice discover the wilderness shows that one is inclined to watch on a stormy day. One would think if Sarah is going to ‘earn’ the real bucks, will it mean us watching her making out with the occasional reindeer, Todd the local drunk who back in the day was a TV extra out there in LA or her confronting the camera in her bikini and pontificating while doing massive amounts of moonshine why the Russians have refused to invade her ‘country,’ – Alaska.

Discovery likewise is vying for the project for one or more of its outlets, including TLC.
Palin is asking for $1 million-$1.5 million per episode, a hefty amount for a first-year cable series.

Yes, agreeably it is a hefty fee to pay Sarah, but look at this way, at least Sarah has figured out that the networks will make all their money back and then some because she knows everyone will be clambering over their TV set to watch her get away with another fine mess. Of course, it will all one day end when Russia attacks Alaska.