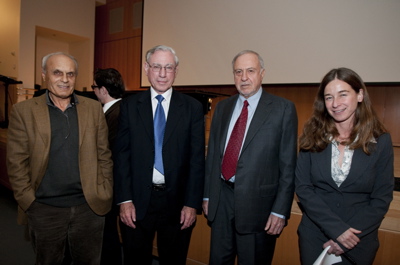 The Israel-Palestine conflict is almost certainly the most controversial issue of modern times, yet rational discussion of the topic often seems impossible. Participants and pundits alike tend to base their opinions of the dispute not on empirical evidence, but on ideology, mythology, and self-perpetuating groupthink. However, despite the seemingly insurmountable differences in collective memory of who-did-what-to-whom-and-why, there are still absolute truths, truths that can only be gleaned from the careful examination of authentic, primary documents. We may be living in the time of what Stephen Colbert calls “truthiness,” but it turns out that the facts have a defender – archivists. We need archivists not just to tell us where we’ve been, but also to help us understand where we are now.

The Scone Foundation honored two professional archivists this week, Director of the Israel State Archives Yehosuah Freundlich, and Director of the Al-Aqsa Mosque Library and the Islamic Library Khader Salameh. Bestowing the award of Archivist of the Year on these men is important for many reasons, not least of which includes the fact that typically the only honor an archivist receives for his or her meticulous toils is in the back of somebody else’s book. Both of these men have spent their careers cataloging the aged records of Israel and Palestine, respectively, an endeavor that has implications far outside the realm of academia.

“Open and unfettered access to archives can serve a public good,” explained Director of the UCLA Center for Jewish Studies David N. Meyers. Archives allow societies to recall their “finest moments and darkest pasts.” Archivists use primary sources to fight against distortions in collective memory, though people still prefer their history handed to them in a neat little packages topped with a tidy bow. Europeans were afraid Christopher Columbus would sail off the edge of our flat earth. George Washington could not lie to his father about chopping down the cherry tree. Benjamin Franklin discovered electricity by flying his kite in a storm. What do these historical “facts” have in common? Despite what we’re taught in elementary school, none of them are true.

Though these historical American untruths are hardly pernicious, separating fact from fiction is of vital importance when dealing with the Gaza Strip, the West Bank, and Jerusalem. Columbia University’s Rashid Khalidi explained that when it comes to collecting history, Israel has the overarching advantage. Because Palestine lacks statehood, it also lacks the trappings that go along with sovereignty. There is no Palestinian National Library, no equivalent to our Smithsonian Museums, and therefore no power to shape the way Israel and the rest of the world see past events.

As Dov Waxman posited, this puts modern archival work into a sort of Catch-22. Israel and Palestine need a “shared narrative in order to establish peace… but need peace in order to bridge the narratives.” Archivists like Freundlich and Salameh have spent years working from either side of the conflict to overcome this paradox and ensure that the wealth of information on both sides is not lost. This work is vital, because as Meyer put it, “Is it possible that the antonym of forgetting is not remembering, but justice?”