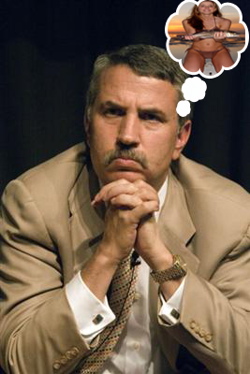 When the only predictable thing about Thomas Friedman is that he can’t predict.

Those who caught Thomas Friedman’s January 12th op-ed in which he predicts continued and steady economic gains for China’s foreseeable future will no doubt be convinced that the Middle Kingdom’s future is on the right track, particularly if those readers are unaware of Friedman’s past attempts at predicting the future – and we may presume that they are indeed unaware of such things insomuch as that they bother reading the fellow’s nonsense to begin with. There is, in fact, a direct correlation between how much one knows about Friedman’s various failed predictions and how deeply one sighs when the fellow makes yet another one of the damned things. That Friedman has predicted an extended duration of Chinese economic growth does not necessarily mean that the Chinese economy is instead about to slow down, of course. Rather, it means nothing at all.

Friedman’s most recent foray into the Far East leads the New York Times mainstay to provide “two notes of caution” to those who suspect that Chinese economic growth may soon be coming to an end:

First, a simple rule of investing that has always served me well: Never short a country with $2 trillion in foreign currency reserves.

… particularly if one lives in some bizarrely simplified dimension wherein no other factors need to be taken into account when determining the prospects of the world’s most populous country. But then I am interrupting. Sort of. Not really. Anywho:

Second, it is easy to look at China today and see its enormous problems and things that it is not getting right.

It was also easy back in 2001, when Friedman dedicated a column to addressing various “myths” regarding that country and predicted that the biggest threat to its regime would be a massive increase in unemployment “as superior U.S. sugar and wheat start flooding China” due to relaxed trade barriers. In fact, unemployment had been rising in China since 1999 and continued to do so until 2003 – at which point it decreased and remained relatively low up until last year. Meanwhile, U.S. wheat and sugar failed to make any significant inroads at all – even as the Chinese continued to consume greater quantities of wheat, total imports from all other nations amounted to less than a tenth of China’s domestic production in 2005. Our sugar didn’t do much better.

In the same column, Friedman dismissed concerns over whether the Chinese regime would successfully insulate its population from dangerous ideas conveyed by way of the internet:

Yes, it’s true that the Chinese government has tried to block access, but it’s not working. Come with me here in Nanjing and I will show you how to view online Tibet.com — the official Web site of the Tibetan government in exile — or NYTimes.com. No problem. Deep down, the leadership here knows that you can’t have the knowledge that China needs from the Internet without letting all sorts of other information into the country, and without empowering more and more Chinese to communicate horizontally and create political communities. In the long run this will only give more tools to the forces here pushing for political pluralism.

It turns out that “the leadership” didn’t know anything of the sort, which is why they promptly established what’s known today as The Great Firewall of China and continue to crack down on such things as social networking sites as new “problems” arise in their wake. Meanwhile, the regime even managed to force Google into compliance with the nation’s censorship policy until such time as the company’s executives got huffy at being spied on as if it were some sort of Chinese person using the internet or something. Perhaps some high official managed to figure out that free access to the internet would “only give more tools to the forces here pushing for political pluralism” and, being opposed to such things, decided to oppose such things. That would have been a tough one to predict, of course.

Our Pulitzer-possessing columnist has not fared much better in sizing up the future of Russia or even its past and present. In late 2001, he called on Americans to “keep rootin’ for Putin,” who had already proven himself a crook to those who were paying attention; three years later, he announced that the country “was tilted in the wrong direction and is now tilted in the right direction,” noting that being titled in the right direction entails “enough free market, enough rule of law, enough free press, speech and exchange of ideas that” that the next generation “can grow up, plan its future and realize its potential.” It was not until 2007 that Friedman finally got around to noticing that Russia can no longer even be termed a democracy and explained this to his readers, who are always the last to know. In Friedman’s defense, he’s not as bad as Putin.

At any rate, China’s economy may continue to hum, or it may begin to decline. If you’d like to find out which is most likely, ask a fucking economist.

Barrett Brown is the author of Hot, Fat, and Clouded: The Amazing and Amusing Failures of America’s Chattering Class, which contains another 12,000 words on Friedman’s offenses against rigorous analysis of the world around him and which is now available for pre-order. Buy a copy and send it to that guy who inherited The New York Times a few years back. You know, the one nobody respects. Yeah, him.