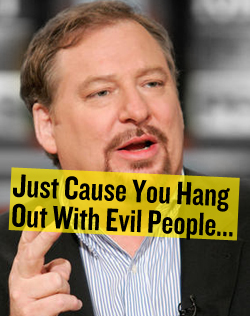 If you are going to lead your life in the public eye, you have to be careful with whom you associate yourself.

Rick Warren, the pastor who delivered the invocation at Obama’s inauguration, has come under fire once more for his association with a Ugandan pastor, Martin Ssempa, who would like homosexuality in Uganda to be punishable by death, and to jail family, friends or a acquaintances who fail to report their gay loved ones to the government. While Warren has distanced himself from Ssempa – who has also been known to burn condoms “in the name of Jesus” – he has refused explicitly to condemn Uganda’s propsed anti-gay laws.

Warren has said that his role as pastor is to “encourage, to support. I never take sides,” but seems not to apply this rule universally. He saw fit to take sides over subjects such as abortion and Proposition 8, but this particular issue seems not to pique his appetite for political involvement.

“On Meet the Press [Warren] spoke a good game of loving gay people (while fighting against their rights). But though he declared that his “role is to love everybody” (which presumably would include gay Ugandans), this love seems not to stretch quite enough to oppose their execution and life-long incarceration.

“When you build the platform, put out the chairs, advertise the even, set up the audio system, introduce the speaker, and hand him the mic, it’s disingenuous to claim that you are not taking sides. Rick Warren was significantly responsible for building Martin Ssempa’s influence in Uganda, and releasing a statement that he has “severed contact with Mr. Ssempa” two years ago is not an adequate reaction to Ssempa’s efforts to incarcerate and kill gay people.”

One speculates that this is one occasion where taking sides might be considered not only appropriate but absolutely necessary.