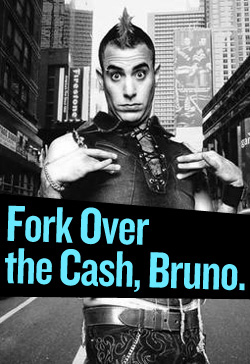 Sacha Baron Cohen overturned America when he released the movie in 2006 named: “Borat.” His ability to disappear in to his character and believe himself to really be a Kazakhstan reporter traveling through America for his first time was hilarious and convincing. I guess for some it was too realistic, as he fooled many of the people who appear in the film for him to be a real person. After it left theaters, all we had left was to eagerly anticipate his next film based on another character: “Bruno” in 2009.

Based on a gay Austrian fashion reporter going to America in order to become famous, the storyline was almost the same except for the difference in the main character. The antics were also completely the same — making us cringe and laugh at the awkward situations Cohen got himself in. With the same laughs and same gags, however, came the same wave of lawsuits by the people appearing in the movie.

With “Borat,” the lawsuits included: Jeffrey Lemerond, (who was the man who was “fleeing in apparent terror, screaming for Mr. Cohen to ‘go away'”), who sued 20th Century fox claiming his image was used without permission. The southern Romanian village where Borat was seen introducing his “home” had two residents file a $30 million lawsuit over indecent portrayal of the people in the village. Many more continuously popped up as well. Two of the college fraternity members who were seen binge-drinking and make crude racist comments also filed a lawsuit — as if their ignorance could be solved by receiving money.

With the release of “Bruno” the lawsuits didn’t stop a-coming. The most recent one is by Abu Aita, who was captioned as a real terrorist. He claims that he is a “firm opponent” of terrorism, and after the release of the movie, the film has ruined his life — he has even received death threats. In real life, is he actually a Palestinian grocer and peace activist from Bethlehem. He believed Cohen to be a producer of a German film revolving around the Palestinian cause. According to Cohen, however, Aita IS a real terrorist as he found him through a CIA contact.

He is demanding 70 million pounds, which is roughly about $115 million in American dollars. The price is a bit steep, considering the movie’s budget was $45 million, however, is he really is receiving death threats over what was panned to be a stupid movie, how can you really put a cost on someone’s life? Seeing as the judge threw out all the lawsuits that came into court, it’s only a matter of time to see if Aita is thrown out on his ass as well. If Aita is proven to be a terrorist, then good luck to you sir, you just ruined your own life by demanding attention from the US government. If Aita isn’t really a terrorist, then Cohen and the filmmakers should make another movie to pay off the debt, and maybe for the next one, he should fact-check a bit more so he doesn’t end up ruining someone’s life for his own financial gain — or financial loss.