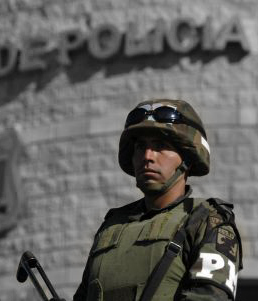 Sleeping with your AK machine gun under your pillow.

For most Americans, going to Mexico involves a 5 day gated get away to a fluffy destination somewhere in Mexico, accompanied by other like minded Americans in abundant attendance with your token Mexican running around after you (yummy right?). But for most Mexicans, this faux reality couldn’t be further from the truth. Out of the BBC comes a sobering tale of a town lauded by overrun drug czars, corrupt government officials and beaten down citizens. Which town you wonder?  It’s called Juarez and we’re betting that you have never heard of it and that you definitely are not rushing to get there either (unless drugs, guns and a heavy sun set are your currency, more yummy).

The BBC  reports that the town is slowly descending into anarchy. How much anarchy, you ask? Let’s give you a taste.

—Masked men stand on the roof of the central prison in Juarez. Rifles are at the ready.

Increasingly, some believe it is not the drug trade that is at the heart of the crisis, but political corruption and poverty. It appears that until these issues are tackled, there will be no end.

“The drug problem is just a consequence of the decay of rule of law in this country,” says one businessman with joint Mexican-American citizenship. He too prefers to remain anonymous.

Sticking your head above the parapet in this city is not something people do readily. Kidnapping and extortion, along with the murders, occur often.

So in other words, you can drop on by, get yourself a nice line, great tan, a burrito, and if you’re unlucky a bullet to the head. If you’re just mildly unlucky, it will be the most memorable scare of your life. Still thinking of coming on down? Of course you are.

“We have an unsustainable economy – a globalized economy – which pays very low wages. That allowed an alternative economy to be created which also globalized – drugs. Both economies are playing here. Juarez is a very important place for both.”

Poverty is driving many into the arms of the very cartels the government wants to wipe out.

The government insists it is working to protect the people. The president says his tactic of meeting force with force will work in the end. He is trying to reform the judiciary, the police, and to tackle corruption.

Many, though, like the businessman who prefers to remain anonymous, believe it will take something more.

“What we need to change is our political model. We need to establish to establish a rule of law that functions, that gives rights to every citizen, so that they are not taken advantage of.”

So at least the government insists that it protects its people you should be fine to fly down to Juarez, grab a burrito, get a real in depth sense of what is ailing this third world nation and why a beach town that could have been has gone to the dogs.

If only all of Mexico was a beach resort. America would be there every other weekend.