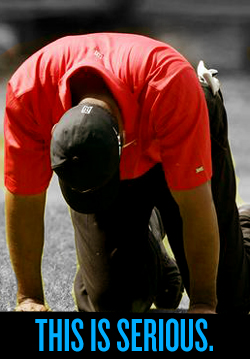 The sports worlds’ first billion-dollar boy Tiger Woods (or almost billionaire athlete depending on your sources) was injured in a car crash in the early morning hours the day after Thanksgiving.

Early reports rendered the star athlete seriously injured. The whispers around the world were–would he be able to play again? Prodigy that he is, this loss would have been insurmountable to the sports world. With the only word being that his injuries were serious, and the media circus that had surrounded his house, one could only assume that serious meant, well ‘serious’.

One media outlet described the coverage of the golfers accident as equivalent to “the day Michael Jackson’s first accuser came forward with abuse allegations”. Most mentioned the story at least once every fifteen minutes and Black Friday shopping or the lack of Black Friday shopping was put on the backburner.

Now serious injury is subjective. If a supermodel was in an accident that mangled her face but didn’t affect any of her critical organs that would be serious. For all others who do not make millions off of their looks, an injured face, but intact internal organs is usually not a critical accident.

So when announced that Tiger was critically injured as some news media reported, we all assumed that he was very hurt or at least injured in some manner that would affect his illustrious career. And then he was released. Released the same day he arrived with “facial lacerations”.

Facial lacerations? We all sighed a collective sigh of relief. He would be okay and probably play again soon. But then a certain question begs to be asked. If facial lacerations were the extent of Tiger’s injuries, why was the world treated to a day of non-stop Tiger Woods coverage? And who decided facial lacerations were critical injuries? We can all agree that Tiger Woods is no beauty queen. He isn’t even Cristiano Ronaldo (although Ronaldo plays soccer, it is the general worldwide consensus that his face is a work of beauty) so why was Tiger Woods the topic of the day?

He saved the slow news day where the topics of the hour would have been turkey leftovers and the recession. But the grossly exaggerated coverage of a critical injury, that turned into a serious injury, that turned into facial lacerations, which turned into mere boo-boos, was not worthy of the media frenzy we were subjected to. Thanks but no thanks. I’ll take news reports on how to make leftover turkey into gourmet meals any day.