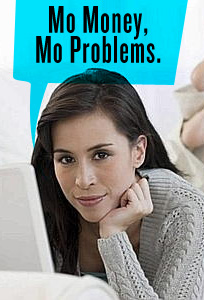 When marrying the help is never a good career move.

Life for society gal Christina Ambers has gotten difficult ever since she had the temerity to marry the local porter at the posh Upper East Side residence where she lives. Serving as an example of improper conduct, the glorified foot model (yes such things exist on the Upper East Side) has been forced to endure sneering glances, turned up noses and the declined requests of the residential board to maintain her stay at the fun place she calls home.

Not to be messed with (Christina is a foot model after all), she has decided to take the snub all the way to the courts where she is suing the pants out of the co op for treating her in a way anything less than her status would demand.

The building’s actions “stem in large part from the fact that this wealthy Upper East Side cooperative objects to a Hispanic former porter residing side by side with the other” tenants. the lawsuit against 340 E. 74th St. Owners Corp. says.

Yes. Quite unpalatable Miss Chambers. How could you stoop to marry below your ilk?

They have allegedly faced retaliation at the 12-story building. They aren’t told when messengers and packages arrive, and staffers refuse to get cabs for them, as they do other residents, the suit says.

Oh dear! Co-op boards can be so mean. But how did it all come to this? After all, even co op board members must surely believe in love?

Management allegedly forbade Rotger, 32, (the porter) from being with her in 2008, but he couldn’t stay away from his soulmate.

They carried on in secret, but were eventually found out. Rotger was fired a short time later — and left his Bronx apartment to move in with Amber.

My, my, this all sounds so horrid. Why doesn’t Christina just move away into a less snooty building on the Upper East Side? Surely they must exist?

When a water leak buckled the floorboards in Amber’s apartment, the building managers refused to make repairs, the suit says. Now the couple can’t move out, because the damage made the pad unsellable. In the meantime, the building held a meeting last night to discuss the possibility of terminating their lease.

A lawyer for the building, Joe Colbert, said “their claims have no merit.”

Oh dear what a horrible turn of affairs…

The lesson to learn? If you must marry someone beneath your station in life, never do it on the Upper East side. There will be hell to pay.