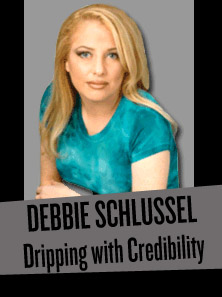 Hate and Panic in America.

Pursuant to last week’s bloodbath at Fort Hood, Texas  bloggers have been barraging each other with name calling, insinuations and other clever one liners that will get the most viable attention and press. That said, welcome to the sordid world of Debbi Schussel who apparently is in the business of blogging and helping America understand why we should we be totally afraid of muslims (as opposed to bloggers).
Writes Debbi in response to Brian Cuban’s blog post stating that authorities had yet found any conclusive evidence for the motives behind last weeks shooting. Debbie decided to reply from the safety of her cyberworld the following:
“As you know by now, the “experts” – including fake doctor, Dr. Phil, and Mark Cuban’s brother (on Twitter)–are lecturing us that  Dr. Nidal Malik Hasan, didn’t kill at least 13 American soldiers and injure at least 31 other soldiers because he’s a devout Muslim.”
Well, maybe Debbi has a point, maybe the devout Muslim bit has something to offer, but further reading below will certainly get you to see Debbi in a new and sexy light-
“Or because he apparently wrote sympathetic, anti-American messages online approving terrorist attacks on American soldiers.  Or because America spoiled him with free college and medical tuition courtesy of taxpayers, which he repaid by hiring a lawyer and killing soldiers.  Or because he yelled “allahu Akbar” [allah is the greater or greatest (meaning greater than the Christian or Jewish deities)].  Or because he allegedly handed out Korans before the attack. Or because he was a member of the extremist, pan-jihadist Islamic Society of the Washington Area, which was trying to help this pious Palestinian Muslim find a devout Islamic wife (and had no luck in doing so).”
Seems like Debbi is on a roll here (no matter how poor the grammar and phrasing) and who are we to stop her? After all, one is entitled to be a bigot or racist if they want, even if we may think it’s morally and politically incorrect.
But what do we know about Debbi? Nothing much really, but we’ll leave with you one more sobering tweet from her:
“PS, Brian: I have had five very serious death, rape, and torture threats on my life and my family member’s lives, all of them from Muslims, three of whom were prosecuted.”
When all else fails, hating all Muslims is an interesting idea. That is, until someone gets it into their heads to hate Debbi, too. America: where you are always entitled to your opinion.
Brian Cuban. com
The Idiot’s Guide To Islamophobia
SHARE
Facebook
Twitter