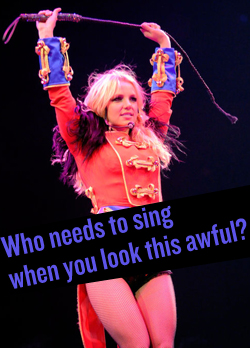 (a second point of view on a previous Predator story)

Britney Spears’ fans seem to be a tad bit upset by the fact that she is lip-syncing her way through her Circus tour down under in Australia. Reportedly, several fans left the arena after being disappointed by their pop queen. “I want my money back or I want her to sing properly… The ticket cost me $200 and she lip-synced the whole thing,” says one fan. I just have to pose the question, didn’t Britney become famous because of her dance abilities and catchy tunes rather than her stellar singing voice? Hasn’t this been disputed since the moment she debuted that she was more of a sexy icon rather than the new Celine Dion?

In her defense, her tour promoter said, “Britney is aware of all this and she’s extremely upset by it. She’s a human being. I’m embarrassed, with such a big international entourage here with Britney, to be part of the Australian media when I see that kind of totally inaccurate reporting.”

I don’t know if these fans are true fans of Britney, because no matter what she does — whether she hangs a snake off her shoulders or crawls her way across the stage — they should be cheering along and going home to mimic her stage moves. Another fan complains, “You couldn’t tell if it was Britney or not,” due to the lack of monitors that showcased Britney for the cheaper seat areas. Once again, they are “cheap” seats for a reason, am I mistaken?

Maybe I’m biased because I’m a huge fan of Britney’s or bitter because I couldn’t buy tickets to the show, however, Australian fans should be aware that this is Britney Spears and not Christina Aguilera. She won’t go on ridiculous riffs or belt out a power-house song. She’s going to danc and lip-synch her way through her number one hits. And seeing from the success that she has and the platinum number one songs she has on the charts, Australia should sit back, relax, and enjoy Britney, in all her lip-synching glory.

Britney Continues To Piss Off The Aussies!