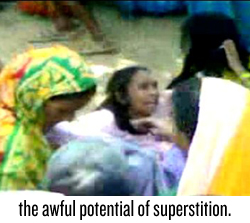 How can these things still go in the world? And why?

Out of the BBC comes a torrid tail of what to do when you find out your next door neighbor is a witch. Disturbing, Discretion advised…

Five women were paraded naked, beaten and forced to eat human excrement by villagers after being branded as witches in India‘s Jharkhand state.

On the surface, this all sounds rather horrid and in fact it is. But before one begins to go off and hate India, one has to bear in mind that punishment in any state is never a delicate affair. In the U.S., we lock people up in tiny cells and sometimes leave them there for long stretches because they were found guilty of a crime (sometimes not even tried or charged). Some of these crimes can be as little as driving offenses, possession of narcotics or forgery. All deemed as unlawful, but perhaps in the context of society they don’t pose the type of threat that, say, armed robbery or slaughter do.

That said, the story continues,

Correspondents say the abuse of women who are branded as witches is common, but rare footage of the incident has caused outrage across India.

And then it continues…

“On Sunday morning the victims were taken to a playground where hundreds had assembled to watch the ghastly incident,” deputy inspector general of police Murari Lal Meena told the BBC.

“No one in the mob came forward to rescue the victims as they were being stripped and beaten up,” he said. The victims are now under police protection.

This should bring to mind the times when American citizens were persecuting witches in Salem Massachusetts (and burning them alive). And more recently, the persecution of people who hold different religious beliefs or political points of views by the Macarthy communist witch hunts in the 1950’s. Or maybe even the recent limitation of our privacy rights in order to ‘scrutinize’ possible undesirables in light of terrorist activities?

Moral of the story- persecution of witches, undesirables and political outcasts is never savory, but then again what’s stopping you from calling attention to it?

When staying quiet is the greater wrong…