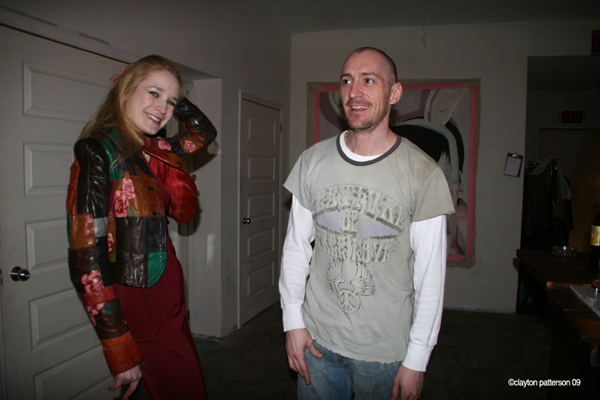 “People think cause we are downtown and artists that we eschew uptown, the moneyed classes but that could hardly be further from the truth. We are all inclusive and as long as you are constructive, enjoy what we do and are instrumental in helping us keep this place both an aesthetic and commercially viable entity we’re interested. I think it’s so passé to be anti establishment, because you have to realize if you want to affect the establishment and change it you have to do it in concert with them…”

If you want to know who Stuart Braunstein is and by extension what the collective promises to be you have to go back some 20 years ago when Stuart first graduated from Oneonta State with a BS, lived as a free wheeling vagabond in Europe before returning to NY where he started designing lounges on the Upper East side, morphed into other uptown denizens before spear heading the seminal downtown ‘SHINE,’ and meeting like minded visionaries like Rony Rivellini who as Stuart comments stuck his neck out for me.”

“Unlike Andy Warhol’s factory Collective Hardware isn’t about one identity or person, it’s about a collective of energies and people that we believe in and see opportunities in.”

Asked about some of the projects currently underway, SaraBeth blares out “Monsterotica,” her camera by now squarely focusing in and out on me.

“A high powered chic flick that tracks the travels of a runaway in the tumble weeds  of NYC.”

“Similarly,” Braunstein intones “we are looking to do a reality show about the Collective with Daniel Pinchbeck, film maker and author with what goes on here, an in house TV station currently in development that Daniel is orchestrating along with Jeff Hagerman (who produced “Democracy Now” for the past two years) and then there’s our pet project with Dan Folger of Studio 13 productions investigating doomsday. This of course fits in with the collective’s concern for the world’s ability to afford self sustenance and harmonious living. This of course on top of the recent Daniel Kay “Black and White” show, curated by Meghan Carleton which showcased the works of Warhol, Basquait, Irving Penn, Frank Stella amongst others.”

Braunstein smiles, pulls on his cigarette and watches in amusement as I do a double take at the next collective of people who are now suddenly wondering into his offices. In a moment I am now sitting in with a master Dj Ben Ruhe who has intoned all the most esoteric and eclectic off the cuff releases and who with his partner are busily recording their newest album upstairs.

“You know what really changed my perspective ,” he now says, “is when I came home after my episode with Sean Parker. It’s then that I realized that utopia and harmony and creative dispositions are wonderful but really at the end of the day you’ve got nothing unless you can monetize the project. So in a way what we have done here is have entered into a collection of individual negotiations in acts that we inherently want to support and nurture but will also see the time of light with as well. Really in the end this place is all about all or nothing and nothing doesn’t register too strongly with me…”

For a while he sits there in silence both amused and stimulated by the coming and going of various entities before he suddenly offers this:

“You know we are living in unique times right now and you might not know it but we are really living in the wild west of the Art World and everything and anything if well done and that captures the public imagination is up for grabs. See that’s the beauty about this place- it’s designed for public consumption unlike a lot of other entities which are tailored to exclusive ranks and those who are art dealers and live in this exclusive paradigm. That era is over, we really believe that art has gotten back to the people, and how can we not when the people are coming to us? Frankly it’s something we are willing to invest in and we aren’t in any rush to make quick bucks, we want to do this organically and harmoniously…”

He stops to think and consider what he says before finally adding “Of course you have to figure out which is the right fight to fight.”

It’s at this moment that Ben Ruhe once again claims my attention and pulls out a mini trunk case with a collection of cd’s that’s probably worth at least $30 000 as if he too were pouring over his soul. Out of the corner of my eye I watch as Stuart once again lights another cigarette but not before he has put every piece, body, entity, energy, commitment in the room into the collective place called his fertile imagination…

Looking for Plato at Collective Hardware.