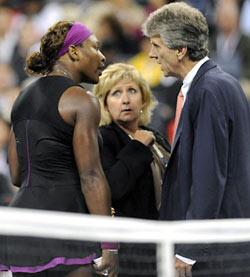 When memories of John McEnroe are induced.

It looks as things have gone sour for Serena Williams as she was playing Kim Clijsters at the US Semi Final. Not thrilled with a line judge’s call while serving (match point) Serena decided behaving ballistically would ensure having the line judge mortified and her the call reversed (wishful thinking). In any event Serena who has now suddenly served memories of another wacko tennis great- yes John McEnroe ended up being deducted a point for her outburst and consequently forfeiting the game to Clijsters.

What makes this very interesting is as Williams turned to re- serve (this after staring down the official and telling her she was going to ‘fucking shove the ball down her fucking throat’- yummy!) she decided to instead walk back to the line judge and stare her down. (ok replays clearly show it was a bad call but stare downs?)

Wow. Now those are the type of sportsmanship and entertainment values that we have been sorely missing ever since John McEnroe retired and made tennis as interesting as watching golf on a rainy day.

Where does this put Williams? We think this sets her career up as her own reality star, as she has now proven her abilities to being entertaining, a public nuisance and photogenic- the tell tale trifecta of all the necessary requirements of being offered your own reality show-

“Serena hates you TV show.” Now there’s a thought or “You looking at my man Bitch? show.” You get the idea.

Of course the racial over tone hasn’t escaped us either, with commentary suggesting that she was resorting to ‘typical angry black person persona who feels they are owed something by society.’ We wonder…? What about if Serena was just an angry white male, would her anger then be more understood and accepted? Or is she just a diva used to getting her way, or maybe just maybe having a bad day at the office?

In any event even John McEnroe thought it was all a bit much (please we know he was loving every minute of it) and that Serena should cool it.

What do we think? We think tennis has suddenly become entertaining again and we should all thank Serena for publicly humiliating and degrading herself for the sake of making the sport interesting again.

Sometimes drastic behavior is necessary if we are to notice your existence.