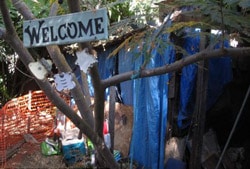 The eleven year old who was brain washed for 18 years?

By now the story has broken on how Jaycee Lee Dugard was first kidnapped and made to live in squalor against her will with Phillip Craig Garrido who coincidentally borne 2 children with her when she was first eleven and then fifteen.

What is disturbing authorities is the close emotional ties that Jaycee has with her abductor, and are wondering to what degree Garrido ‘brainwashed’ her. Of course one must bear in mind that he did abduct her when she was a child and like many women who live with men who abuse them, sometimes some relationships become perversely co dependant, and as much as we are loathe to think it perhaps Garrido has become a surrogate figure, that or a great con man.

What authorities are surmising is that the real prison wasn’t so much the compound that Jaycee lived on, after all she had chances to appeal to neighbors but her mind. Somehow they are surmising that Garrido was able to brainwash her. Of course this kind of reminds us of the way the current cultural paradigm manages to brainwash most people by having them believe that reality celebrities are it and that living within the confines of a materialistic – buy more flash or they wont love me anymore – sensibility is the road to happiness. It isn’t – even if shiny toys are capable of making you smile for 9 minutes.

Of course in Jaycee’s case the damage are more grievous, denied her family, her childhood, contact with other human beings, raped and living in a mental cocoon one has to wonder how she can begin to rehabilitate.