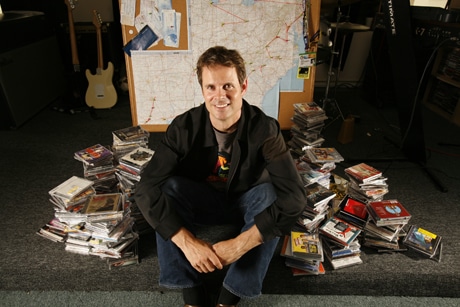 Tim Westergren has been instrumental in the way we understand and consume music today. Founder of Pandora.com, a portable loading internet radio station three years ago, along with the Music Genome project, he has undertaken one of “the most comprehensive analysis of music ever undertaken.” Undertaken it so you can ultimately build your own vast custom made portfolio, and sing alongside him. Intrigued by the man, his vision and what this all means I recently was able to secure a phone conversation with Mr. Westergren in the hopes of challenging the notion of how music is consumed and how relevant  Mr. Westergren’s Pandora box really is. After all if Greek mythology can be any guide Pandora’s box has always been a bearer of ill, deceit and hope…

Like clockwork, Mr.Westergren’s ‘Pandora Box’ accumulates up to sixty thousand new users each day, 3/4 of which are mobile phone uploads.  Unsigned artists can submit their work to Pandora for consideration; if it’s good, a team of hired “musician analysts” will integrate selected tracks into the database.  Given that the musical selection process is unbiased, or dictated solely by calibrated user taste, these emerging artists can enjoy as much “airtime” as David Bowie.   Though a boon to users, it isn’t all roses over at Pandora HQ.  Royalty rates are at an all-time high, and artists themselves are struggling to remain viable in an economy that has become increasingly toxic to record sales.  Add to this the problem of free music download sites like Limewire and the future looks bleak. On hearing this assessment, however, Tim would probably remind us of his muse, the infamous Pandora, and the hope that remains, especially if consumers have any say…

SCV: What is the Music Genome project?  How is it changing the music industry?

TW:Well the Music Genome project is really a DNA mapping of music.  There are 400 attributes per song. Each attribute is really a building block of that song; these aspects work together to collectively define it.  As you interact with the Pandora radio, it just gets better and better by mapping your feedback.  It’s like having a conversation with the geek at the record store; you tell him what you like, what you don’t like, and hopefully walk out with some good music.

SCV: When I listen to the radio, I am constantly frustrated at the music’s repetitive quality; for example, by listening to FM radio you would think that Pink Floyd only wrote three songs in their entire career—“Money,” “Comfortably Numb,” and “Time.”  How is Pandora, and sites like it, different?

TW: We have 700,000 songs currently in our database (and 80 000 artists).  Out of those songs, 70% of our artists are independent.  Last month, 90% of our songs were played.  This is a dramatic difference from the historical pretexts set by the radio industry.  Pandora has the ability to stream millions of stations at the same time, rather than just one, and the personalization offers a broader catalogue of music. It’s all about musical discovery.  This isn’t a popularity contest; we give all of our songs, and the artists, an equal shot at airtime.  Pandora doesn’t know whether the song it has selected is a hit or not.  It’s a democratic form of promotion.

SCV: Do you think that people becoming more or less inhibited in their musical taste; are we learning to break free of rigid genres, to embrace your version of musical democracy?

TW: Absolutely.  We remind you how fun musical discovery is.  It’s like a bug; people get hooked on it.  It really fuels people’s appreciation for music.

SCV: The launch of MTV in the 90’s was a musical milestone; do you see your company as the next big step in the industry?

TW: MTV isn’t really a fair comparison; let’s say we’re like EBay. What EBay did for the mom and pop businesses, Pandora is doing for music.  On EBay, you can have some guy sell pink plastic flamingos and find someone who wants to buy them.  It’s all about giving artists (or flamingo fetishists) access to their desired audience.

SCV: How do you store your user information? Does the site tracking musical trends according to data sourced from user profiles that, over time, only grow more precise?  What does this mean for the future of music and music marketing?

TW: This really comes into play on our advertising platform.  I would love for specific artists or concert venues to be able to really target their audience, but right now we work predominantly with national brands. Hyper targeted advertising is in our future though. Let’s say that a car company wants to promote their new sedan to women in their 30’s who listen to country—we can provide that platform.

SCV: Your site encourages new and emerging artists to contribute to Pandora.  If you like what you hear, your team integrates their songs into the musical matrix.  Let’s say a completely unknown band, unaffiliated with any record label or production company, gains a small following via Pandora.  By promoting their songs alongside established musicians, you are essentially providing the invaluable services of direct marketing and PR. Do you track their success?  If this situation occurs, what sort of rights, if any, do you have to their music?  Do you have a financial stake?

TW: No, we don’t track specific artists’ success on the open market, but I do get a lot of personal testimonials, or feedback from artists who have gained positive exposure through our site.  I’m trying to be rather agnostic as a play list maker.  I don’t want to be in the record label business, and I don’t want our artists to get the impression that we have any incentive other than musical appreciation when sourcing songs.  All I really care about is playing great music.

SCV: Playing great music, however, does come with a price.  The internet radio industry has been fighting against the 2007 royalty rates imposed by the CRB (Copyright Royalty Board), which many believed would put you out of business.  The revised rates will remain in place until 2015; i.e. you have won reprieve, for a few years at least.  How are these new rates affecting online radio?  How do they affect the artists? Are you going to last past 2015?