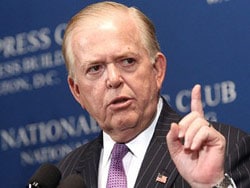 When a talking head can’t seem to stop embarrassing himself and annoy the network he works for.

In lieu of the current controversy and embarrassment Lou has caused for his employer CNN (whether President Obama was born in the US or not despite the overwhelming air time to doubters who think he comes from a cave in Africa) we decided to have a think and came up with some things that may well be suited for Lou to talk about (endlessly no doubt) on national TV.

1/ Do nappies give nappy rash if worn two days in a row? We foresee an avalanche of protest and condemnation from those parents who have sworn off nappies and who now swear by disposables. Watch out Lou.

2/ Does being poor incite resentment or does resentment lead to poverty? This could be a fun theme for Lou and we could easily find him a lot of newly unemployed white males from which to broach the subject with.

3/ Does size really matter? Yes, a bit tenuous and a bit on the raunchy side of things but we think Lou with his dead pan demeanor can handle this one the way a hooker counting her change by the candlelight can handle things.

4/ Is America destined to become a hyperbole of itself and one big reality show staring and hosted by Lou himself. This would allow Lou ample opportunities to meet reality stars and find out what the future of entertainment and principally Lou’s career holds.

5/ Conspiracy theory- “Is the world really just a flat plane and who invented the myth of a world that is round?” We’re sure Lou can single handedly spend hours on this topic, offering us his quixotic observations on gravity, the wind and why birds really don’t migrate in the winter.

Sometimes a talking head is just that, next time Lou stick to the facts unless entertaining us in dribble is the new cue…