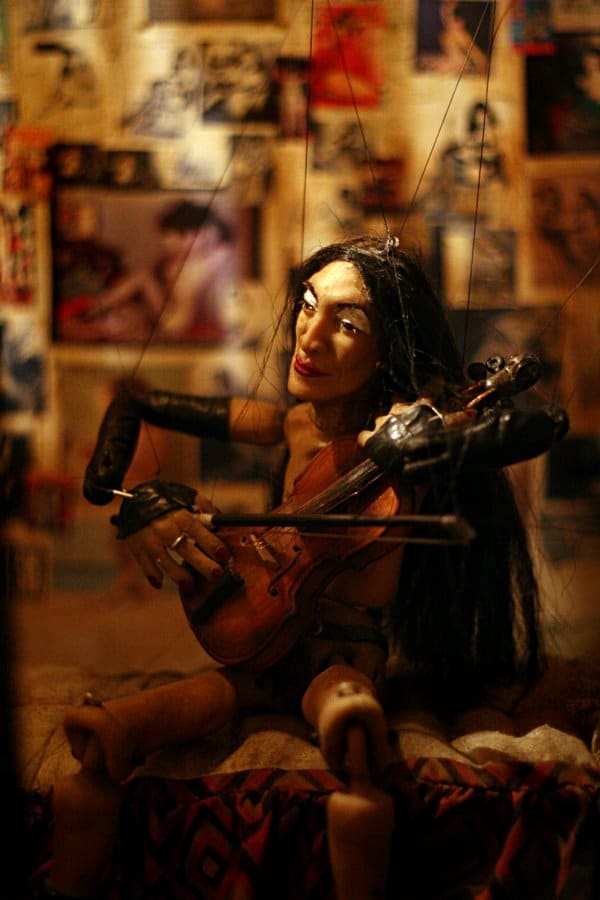 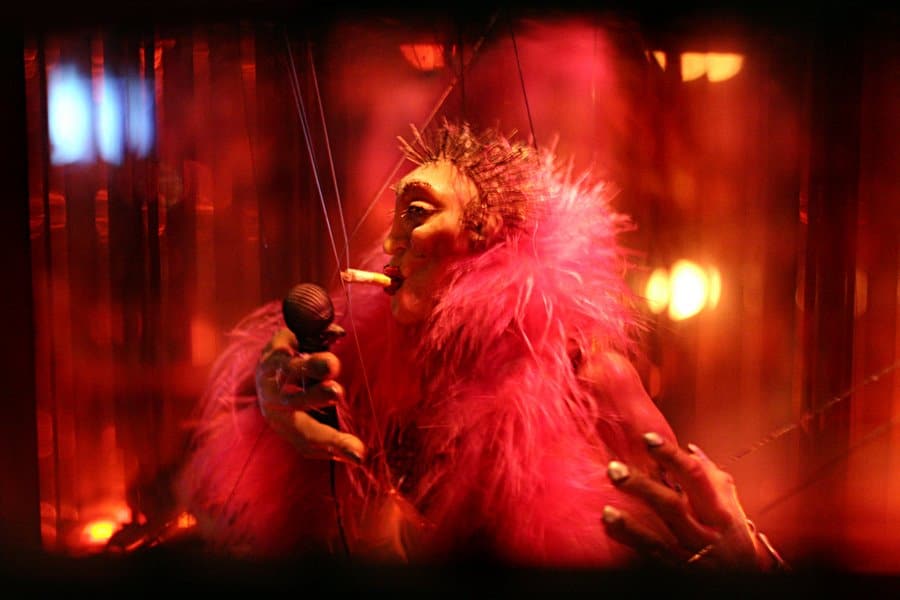 An interview with artist Ety Fefer

Parents sometimes tell their children not to stare at strangers. No one ever told this to Ety Fefer. So as a small child, Ety looked. Then she drew what she saw into small characters and called them ‘los grumildos.’ Now an adult, Ms. Fefer has turned these childhood drawings into a traveling mechanical puppet show and Burlesque lounge. The intricate, colorful and sexualized puppets usually appear in outdoor festivals across Europe. But for the first time in the United States, you can catch them on the basement stage of HERE Arts Center in New York City’s SoHo.

Even though Ms. Fefer grew up in Lima, Peru and ‘los grumildos’ sounds Spanish, the title does not translate into English or any other language. It is a fictitious word for an equally fictitious world. A world that is inhabited by part spider, pig or scorpion and part human puppets gyrating inside of small glass cages, much like those meant for live reptiles. The puppets are suspended from fishing line connected to small mechanical hooks in the containers’ ceiling. The hooks move, causing the puppets to tap their feet or wiggle their hips in the amorous glow of tiny, red lights shining up on them from the containers’ floor.

The puppets elaborateness is apparent in the ash of the smoldering cigarettes they hold in their tight-lipped mouths, their course pubic hair and their individualized fingernails. With such attention to detail, one might think Ms. Fefer is hungry for controlling how her creatures are interpreted. But, instead of being a puppeteer and dictating her creation’s narrative, she allows her audience to develop their own back-stories as they gaze. This lack of narrative control, as Marcelo an audience member put it, “inspires imagination” in the viewers.

The repetitive motion of the puppets, the prominence of their genitals and the dominant red light washing through the room, did not inspire me to imagine long and interesting back stories for the creature-humans. Instead, I felt rather sad for their trapped, repetitive and miniature existences. But Ms. Fefer, knowingly or not, seems to have anticipated this reaction. And in response she has taken close up photographs of the puppets that are enlarged and hung around the exhibition.  The portraits catch the puppets in time and hold them there. Their frail, suspended bodies support faces that do not look fulfilled even though they are in the midst of performing on stage or in the act of having sex. To me, ‘Los Grumildos’ look like they are in need of communication. Like they want to be asked directions or thanked for holding the door.

Traveling uptown on New York City’s C-line, I couldn’t help but stare at the strangers sitting around me. One woman twirled a pen. Another tapped her umbrella. A man rocked back and forth near the door. Good art does not always make us smile. But it should always make us think. Ms. Fefer’s premier in NYC might not be beautiful to look at. But there is certainly a beauty in being given a chance to look and look and look so hard we see ourselves in others. 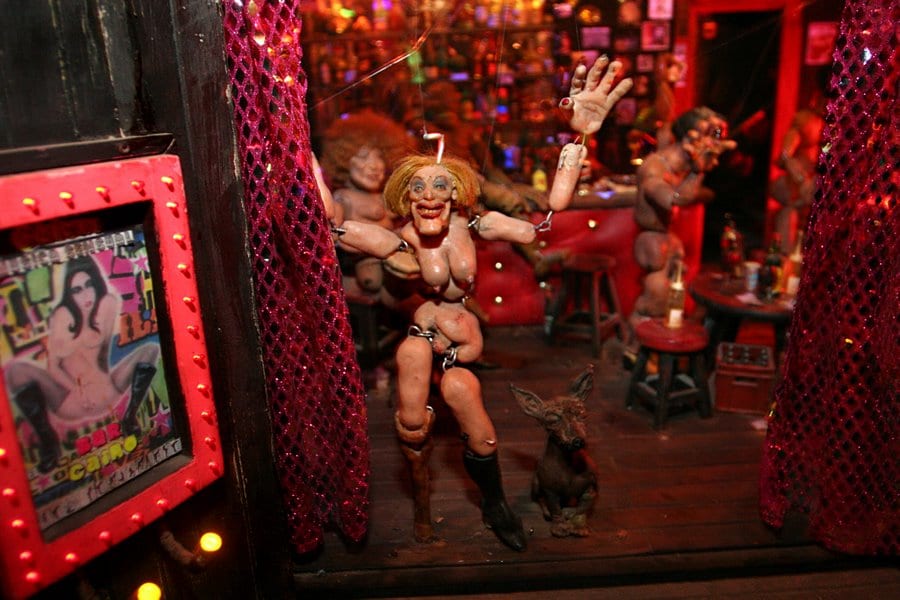 On the second night of the show, I had the pleasure of discussing puppetry, traveling and getting over Red Light districts with Ms. Fefer:

Kat Hepburn: How come you chose to work with puppets?

Ety Fefer: I was bad in school and my toys were taken away from me as punishment. So I would make dolls. I forgot about them until I was 17 and in a shop with figurines. After that I started to make the same puppets that I did when I was young. I liked it, but I wasn’t convinced until I had the chance to travel to Prague and see moving puppets. I went back to Prague to study at a school for puppetry there. The school wasn’t great, but it was a beautiful experience.

KH: You do not act as a puppeteer. Why don’t you want to be in control of the puppets and their stories?

EF: I am not a puppeteer. I always liked to make things; little shows and put lights in my room. I used to try to do shows for my friends, but I am not a performer. I am very shy so they had to be mechanical.

KH: What do you think the absence of a storyline does to your audience?

EF: I love that the audience invents the story for each puppet. It’s like going to the street and sitting in the metro to watch the people. Los Grumildos is the way I see the people.

KH: And this is where your ideas come from?