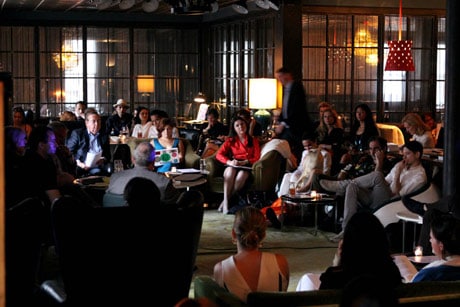 This past Monday found this chap invited to a symposium held at the Soho House in part to reconstitute fashion’s ‘loveable’ status as a must have, but more importantly as a rejuvenated icon desirous in solving the current malaise in environmental issues. With a bevy of lively guests that included an outspoken but loveable curmudgeon James Woudhuysen (a big fish in Forecasting and innovating studies over in England), NYT”S Beauty/Style Editor of T magazine Sandra Ballentine and finally Jeffrey Hutchinson a highly regarded (we were told …) fashion retailer architect. By the time they and the collective ‘us’ (members of select press and fashionistas) had finished I wasn’t sure if any clear answers had been necessarily carved but to say the crowd was fashionably dressed would be an understatement.

This of course is where I want to begin- in an industry that has felt the economic backlash of cash strapped consumers great excitement was made about the idea that ‘where once fashion had of late become a must have status item it had now become perceived as a garish symbol of the excesses that had led to the global melt down.’ Therefore looking to stave off declining sales and appropriate a new marketing campaign (so as to retain a loveable status with shoppers) it seemed to this chap every effort was made to re create a marketing image- which although plausible and with merit (I will elucidate further along) had one nagging if there was so much concern for the health of world affairs why weren’t the biggest infiltrators of toxic waste not invited to this symposium and how was it that an industry traditionally heavy in labor intensive practices as opposed to defense, energy, agricultural and car industries felt suddenly guilty to voice outright concern about the need to go green?

From where we saw it, we applaud all designer’s efforts to reinterpret the world as they see fit, whether green or not and that the passion and creativity that binds the collective arts should be honored and harnessed by an erstwhile idea that the display of appropriate contrition would see them finally exonerated of lagging sales.

If it was an issue of assuaging sales – retail fashion architect Jefferey Hutchinson bought up some very clever ideas that regard to the functionability of what retail outlets where meant to be could address such problems. From ‘pop up’ stores that would come for a designated time and then dissolve to lines that reflected a much more streamlined bevy of desire as opposed to overwhelming our collective senses and the appropriate designing of stores that would stimulate provocation and at the same time heed attention to fuel saving measures. 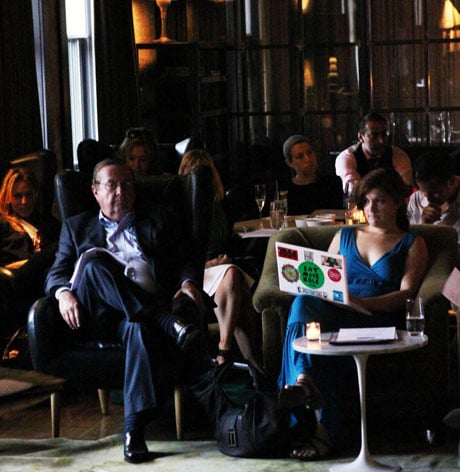 To which our loveable curmudgeon yawned restlessly as he stressed as what he saw the useless attempts by individuals to save the environment with their individual actions but to press instead the point that industry itself as the heavy capital maker of goods and services which in their creation of create toxins should be the ones to regulate and reconstitute design and appropriation of manufacturing. At this stage a quick glance around the room found people either completely stimulated or others desperately reaching for their I- phones to take stock of the latest celebrity gossip…

The delightful Sandra Ballentine tried in earnest to find composure and to offer the idea of individual designers who could jettison appropriate textile materials (she gave an example of a silk clothing designer in Laos) into cost effective resources, as well as conscious regard for the individual choices we all made.

Sitting there I was somehow shocked to be hearing this from an industry that is in the habit of selling clothes that if shows today one year from now and only just collecting the money owed to it by the fashion buyers from 2 seasons ago trying to assuage world climate problems. (one audience member even dared to argue with some merit that the world was cooling not warming up…but that’s another discussion).

When an industry stacked with creative juices is struggling to countenance its own financial and kindred legitimacy with shoppers the idea that more rational economic regard be paid as to when clothes were being put forth and how they were being sold and with what vision might bring them closer to their goal than a loud shake of the head claiming a desire to be green when the real people who can make all things green (the capital intensive industries such as agriculture, defense, energy) where not invited because it was politically incorrect to point the finger at them or expedient to bring the masters of out collective fate to the jury.

Either way it was for this chap an intriguing entrée to the conundrum of perceiving and manifesting wearable design in a fast changing world where most of the ingenuity and research and development has gone into financial engineering and trading (anyone notice all the juicy profits the banks made last week as opposed to the fashion houses?) as opposed into the backend of the fashion industry.

If this chap could make one immediate suggestion- stop waiting to sell the clothes you are showing today one year from now because come a year from now everyone will have forgotten (you made it so exclusive ) and the impostors in China Town would of have already caught on. It’s this type of logical thinking that could assuage the fashion world of their dilemma and perhaps get them to face the problem ‘the real issue isn’t whether making ‘green clothes’ will reignite the business of selling clothes but making clothes the way bankers make investment in timeliness and technological innovation might be the way to go.’

Is PayPal Money Adder a Scam?

Waynesboro boy, 13, to be tried as adult for shooting brother, 9...