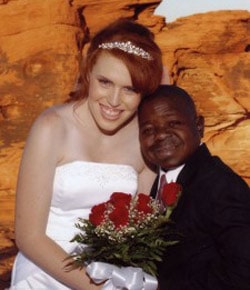 We know it’s mean to pick apart the disingenuous relationships of misfits but some misfit relationships do require special attention to the general American if only to warn them of the complexities of marrying a former child star and current full time loser.

Like the rest of us you are probably wondering why Shannon Price still sticks around(besides the low self esteem issues) and endures the complex ‘fucked up’ emotions of a former child star and current full time loser- Gary Coleman.

With that said we bring you another episode of psychoanalysis of dysfunctional Hollywood relationships and wonder out aloud is it the chicken or the egg that came before the inertia?

As reported on bumpshack (yes we too find this an intriguing and fitting name for a journal concerned with the collective archival of dysfunctional America) –Shannon Price was arrested in fun Utah for flying into a rage, demolishing their trailer home but unfortunately for not laying a hand on Coleman who endured trauma (forget the trauma she’s endured all these years being married to a former child star and current full time loser).

That said there’s something that makes them happy and keeps them together, that said one does wonder what sometimes becomes of childhood actors were once given the world to only turn around and shit on it and themselves…and their wives.

A tortured life of a former child star and current full time loser….’anyway the wind blows’…