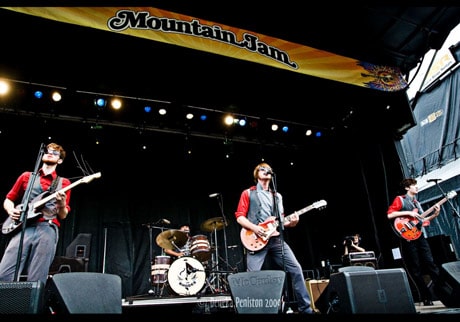 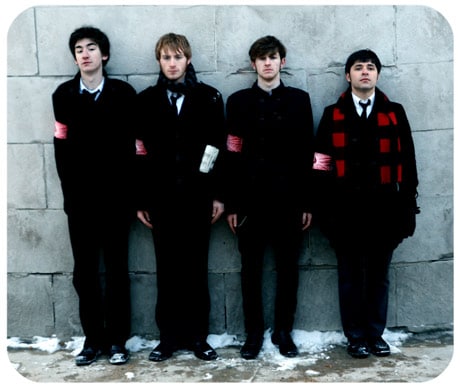 Last Summer in Washington Square Park, unsuspecting people began to take notice of four lads in white dress shirts and black suspenders playing acoustically. Four part harmonies and many parts flawless rhythm perpetuated the park. With homage to the Velvet Underground, Elvis Presley, Sam Cooke and it’s original tune to boot you were pleading for some part of nostalgia. You didn’t know what to call it, but you’d probably would of have danced to it.

One year later, last weekend in fact, the same lads, The Rhodes played the infamous, annual festival on Hunter Mountain, Mountain Jam, as a result of winning a WDST radio contest against seventy five others. Come Tuesday after their biggest gig yet, I’ve finally come to interview The Rhodes. Where I’m interviewing them  (a school bus donated by a former school teacher and one of their biggest fans) tells me more about them than where they are actually heading at this very moment. Of course where they’re heading is a combination of fast paced beats and soulful melodies, but really your impending living room.

SCV: How long have The Rhodes been together?

D.D: Three and a half years.

SCV: And how did the band originally come into existence?

D.L: Originally, Derek and I were in a different band which will not be referred to. We decided that the brand of…

D.L: Yeah sure, jazz…that we were playing-

D.L And that we really enjoyed playing music that people actually liked. And so Derek and I decided to write music that was more according to what we liked and listened to.

SCV: Have all of you had formal music training?

R.S: I took lessons until I thought necessary.

SCV: Do you feel that it’s always necessary?

D.D: It’s never been necessary. After the Baroque period ended, it was never necessary.

D.L: It depends on how you write and what tools you use to write. If you’re using scales and chord cadences that aren’t in the music you’re listening to, then yeah, of course it’s necessary.

D.D: Yes, but really you can acquire that knowledge simply through experience. We’re always looking for those different types of variations…I think the problem with most modern rock n’ roll is that people who are playing and writing modern rock music are not listening to music outside of their genre.

SCV: And what influences would you say you pull from?

D.D: It varies widely. I bet that at least half us are influenced by classic soul and R&B from the golden ages. Big into Motown…also their business model. We’re into The Velvet Underground, Richard Hell & The Voidoids…

D.L: It’s tough because when we write, I don’t think we say ‘I want this to sound like that.’ Something that’s tremendously important is that all of us listen to different varieties of music.

SCV: And where’s the meeting point between your diverse tastes? Where does the particular sound that is The Rhodes exist?

D.D: Where we can all agree that something is musically viable, tastefully done and fits into what we all discuss as being the best thing for the song.

D.L: I suppose it’s a combination of musicianship, creativity, innovation, image – all the things that make something fantastic and catchy and marketable and interesting and everything you could ever want.