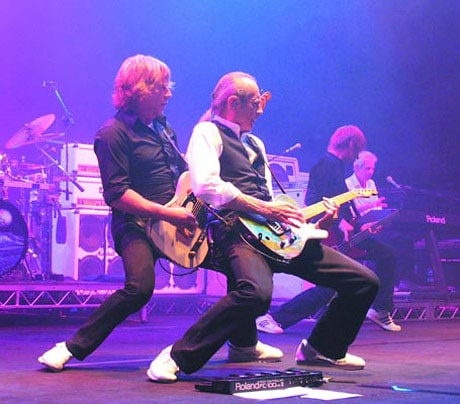 The Do’s and Don’ts of Concert Etiquette

Concerts make for a good evening even if you are not seeing your favorite band, probably because there are few other times when it’s socially acceptable to dance, jump up and down, sing loudly in public, and scream your lungs out. There are also unlimited opportunities to observe certain niches of people in their natural habitat. Seeing the John Butler Trio? Look out for a goldilocks mix of stoners and backwards-baseball-cap-wearing frat boys (see also: Dave Matthews Band). Seeing Band of Horses? Be prepared for an American Apparel salesperson convention (see also: The Arcade Fire). Seeing Jimmy Buffett? Drunken college kids from small towns and middle aged men in Hawaiian shirts (see also: no one).

If the previous paragraph didn’t unintentionally talk you out of ever attending a concert again, be prepared to accept certain concert-going conventions. Follow these simple guidelines to ensure you don’t become “that guy” when at a General Admission show.

1) Do “paint the first coat” before you go. Don’t drink eight dollar cups of watered down Bud Light when you get there, even if it is the champagne of beers.

2) Do match your expectations with your behavior. If you care about standing in the front, pay your dues. Get their early and hope for a good opening band. Don’t be that jerk who tries to push up to the stage just as the headliner walks through the doors.

3) Do learn to appreciate standing in back, especially if you don’t like getting sweat on by strangers. Corollary: If you do choose the back, where there is more space, you don’t get to push people. Specifically, gentlemen, don’t rub up against random females while “dancing.” Which leads us to…

4) Do dance. Don’t grope. This do may seem obvious, but it’s not. Nothing’s worse than being in an audience populated by a bunch of hipsters standing statue-still.

5) Do find the bathroom before the show starts. Don’t expect to be able to push back to your spot once the show has started. What’s the length of an average headlining band’s set? Ninety minutes? Less? We’ve all been out of diapers long enough to handle this, so act like it.

An additional word on mosh pits: If you’re seeing something in the vein of a Korn show, then yes, of course one can expect to mosh. If you’re in the front, that’s what you signed up for. Other situations are a tad more ambiguous. When I saw the indie-pop-punk-whatever band The Thermals recently, I stood through two (surprisingly good) opening acts to get a nice spot front and center. When show started, three or four probably-seventeen-year-olds started violently pinballing themselves around, forcing a few dozen people to push and careen wildly for the duration of the show. I consider this behavior a major don’t. Of course everyone should be free to dance and jump around, but there’s a repulsively egotistical facet to those who think that everyone should have to get pushed around just because they feel like it. These people are power-tripping for all the wrong reasons, and this goes double for crowd surfers. “Everybody look at me, I love this band so much I’m going to make everybody else stop moving so they can make sure I don’t get dropped! Wheeeeee!” Stop it.

Following these guidelines is guaranteed to maximize your enjoyment of the concert-going experience, or at least minimize your annoyance. And don’t forget your camera- National Geographic may need the footage.