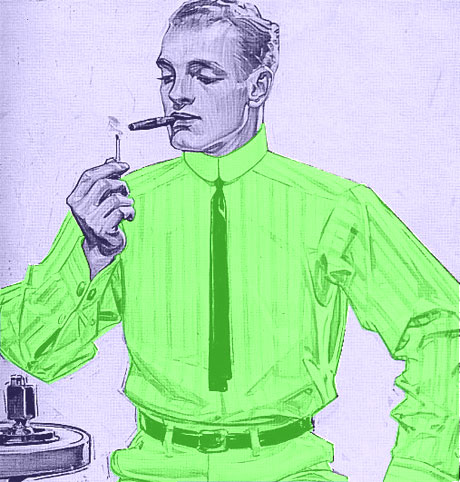 Nonchalance and its sister arrogance are the type of acquired characteristics that can never be feigned. Such qualities of being often take a lifetime to develop and any attempt to affect such dispositions without having being appropriately groomed or steeped in such tradition will leave most people out-ed. That of course shouldn’t stop you from trying as we take you through a careless and carefree new way of being now that you are newly unemployed or as we suspect the type of never do good loafer with trust fund access and a rolodex of friends just like you.

The art of loafing and smoking as most people know originated somewhere in Europe in the late nineteenth century. To have had the pleasure to spend a greater part of one’s day resigned to one’s study or worse –boudoir affected sheer snobbery. Whilst the world and your brother and sisters (if they were unlucky ) were obliged to run banking and steel and gas empires you on the other hand took great pride in your bruised ego, the money your family would begrudgingly bestow on you and the idle past times you would have to invent in order to resurrect some semblance of meaning in your meandering life. Of course there were others, the great majority, the ones who can never feign idolatry even if they tried who were compelled because of economic necessity to work in the steel and gas factories your family owned.

As was accorded during this time you either dressed like a dandy, slept past noon, paid little attention to world affairs but greater attention to gossip and trivia. This would take you until four where it would be time to take tea, some cognac, a well lit cigarette and the company of some scallywag, industrialist, artist or patron who would caution that you were smoking either too much or too little.

In the modern age this tradition of idleness has suddenly had a resurrection. For most of us going to fight in wars or dying of something silly like malaria is hardly an option. The option until recently was to work, amass more comforts, debts, and the items that had you lived a hundred years ago would of have been bestowed upon you for simply being grand.

Fortunately for you, you can still be grand, idle, and if you choose a force to be reckoned with. It’s true wealth and privilege often come by virtue of ones work and title. Assuming you no longer have work, or to be precise meaningful work, learning the acquired sensibility of someone who doesn’t care, spends their time either been idle on their own or with other like minded idle persons can be had. As has been suggested you will be seen as an impostor in most circumstances, thankfully we have had plenty of idle time on our hands and are steeped in the knowledge of meaningless loitering and smoking cigarettes.

To be clear, one no longer has the choice to smoke cigarettes wherever they like. It was once acceptable to smoke in a plane at the chagrin of your fellow passengers but unfortunately for you you are compelled to adopt to current social protocol.

A loafer will never be seen smoking and walking at the same time. To be seen doing such a thing is gauche and giving away that you are just a chain smoker. A more elegant disposition would have you sitting at your favorite café house, country guest house, beach resort, or the sidewalk of a busy bar assuming that the patrons are also genuinely practicing being aloof and idle as you are (one would suggest the lower east side in this instance).

Of course smoking is never enough as any screen hero can attest, you must be in deep thought, gesticulating, or if all else fails smiling and murmuring to yourself whilst flicking through a Penguin classic. To really affect brutal nonchalance you mustn’t dare swerve your head should a member of the opposite sex walk past. One must be fully committed to loafing.

In the event it should start raining a loiterer would never think of rushing home, for the art of loitering requires one to do it in a public sphere. It’s important in order to validate your social standing that you are seen loitering during the day where most ordinary people are rushing off to work and other pointless exercises.

We would suggest in the event of rain or heavy snow an extended trip to your local bookstore. Of course a true loiterer will always settle for a used bookstore or one of those with lots of foreign magazines. Once inside you should take great care to not offend your fellow readers except to only answer your I-phone where you will audibly announce your boredom to whoever is calling and that your trip to some exotic locale is only days away and how of course it pains you to have to go.

In the event that you should ever find yourself in the suburbs, any loitering done in a shopping mall will immediately call you out as an imposter as no dilettante worth his salt has ever stepped in one. It is best to feign sickness and lock yourself in the guest house until your safe return to the city.

If on the other hand you should find yourself at a white tie affair or similar fundraiser one is obliged to take great care to express grudging diffidence but a genuine warming up once the alcohol begins to make the rounds. At some point you should identify who is the most socially superior person (assuming it is not you) and make to nonchalantly move to their quarter, either be introduced to them or failing that remark that you’d like to introduce them to someone in the press world. This should get their attention, with their attention firmly in your hand proceed to smile, reflect on life and decline to offer what it is that you exactly you do for a living – in so much you are just a humble dilettante of sorts.

If on the off chance you are out of money and or no where near a convenience store you should not at all panic as it is preferred that you nonchalantly ask some random stranger for a cigarette and not ever once ever looking them in the eye. Put it to your lips, light it and then while they are still within eyesight throw the thing away, as if smoking really meant nothing to you.

In due course you will be able to affect the time honored craft of loitering and smoking but remember such privileged displays of your superiority can only last as long as you keep remembering to yourself in the end – if smoking doesn’t kill you, time eventually will.