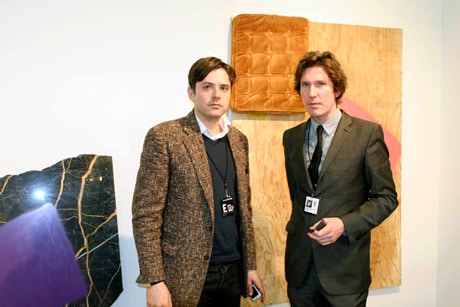 So last night was the last night of the Armory spectacle. To be clear we rather enjoyed the whole experience, the artists, the dealers, the meetings, the parties and the clever banter. Always the clever banter. Yet there was one nagging question on the back of our minds. Are art galleries relevant anymore?

If one were to make a casual observation at the Armory this year it would be that most gallery dealers were not doing  as well this year as in years past. We all know the economy and your life are in skid row and any decent gallery will tell you that they’ve seen something like this all before. Yet what they aren’t telling you is how a lot of artists are starting to reconsider their relationships with the gallery world and whether going on one’s own or bypassing the whole stick and carrot routine is a healthier and saner option.

It’s common wisdom that if you are going to make a pretty penny or let’s just say any kind of living in the art world you’re going to want to be represented by a reputable gallery. Getting one of this decent galleries to represent you can of course be like trying to find the holy grail. Even if you do find one, there’s no guarantee they’re going to keep you or just plain drop you if their star artist is all that they need.

Given the recent conundrum of decelerating art value, art galleries opting to stay home and prey that they make this month’s rent instead we decided to set upon some of our preferred galleries and posit some questions.

What do you think has been the impact of the collapse of the art market?

I think more attention will be placed on the artist going forward instead of what is the best selling item. It will force most galleries to get real.

Does this suggest in the very recent art phase where we had escalating art prices that in some way that the art being created wasn’t real?

I think more that the prices we’re not sustainable.

Can you give us examples?

If one were to go to Berlin one would encounter instead of an art gallery, museum spaces, like an airport hanger for artists which we’re very impractical. It then becomes a shopping mall instead of an expression of ideas and movements.

So on one level, art galleries stopped becoming denizens of value but mere shopping malls?

It’s possible to conceive it this way. But now if an art gallery is to survive they must nurture their core talent. This is why we decided when we came here to concentrate on Jesper Jest.

(Jesper Jest is an exceptionally gifted video maker whose use of metaphors, motifs and the surreal juxtaposition of male/female forms, father/son images, horizontal, vertical delayed movements forces a revaluation of time, space and memory).

It’s easier to take more chances in a bad market like this. In a good market, you only want to show what you think will sell, where as now, because we really don’t expect big sales, most galleries are more willing to explore those talents that perhaps before were not perceived as commercially viable.

Doesn’t this somehow negate the role of an art gallery? To only show art that will sell, and not the work of other artists?

This is an interesting argument and perhaps you could make it, but you have to understand at the end of the day the role of a gallery is to stay afloat, to sell work, so it can champion art.

It’s also up to museums and other institutions to promote and engage art that is not what is everyone currently talking about.

From there we happened upon the relatively young NYC art gallery museum 52, run by the duo Christopher Taylor and Matthew Dipple (for the last 5 years). These lads have certainly taking a very bold stand by choosing to show provocative work, specifically the sculptural works of Sarah Braman.

What do you think of the implosion of the art market?

It’s nothing new, you have to be open to it, and it’s something that is quite cyclical in the art market.

Don’t you think galleries concentration on selling only art that only achieved high sales volume dissuaded many artists from seeking gallery representation?

Yes and No. First of all you have to realize galleries can serve a very important role that the individual artist is either often loathe to pursue or unable to. In fact, HANNAH who’s work we are entirely just focusing on decided to set up an initiative where her and other artists decided to set up their own platform in order to sell publicize their work.

So in some ways, do you also see yourselves as publicists?

We’re here to tell people about work that we’ve decided to champion. However you have to understand we’re also here to engender a business and the whole thing is a balancing act and market turbulence aside we stand firm on our convictions.

Do you think artists will suddenly stop making work given the down market?

Probably create more. It’ll be a concentration on the core of their motives.

Motives that you champion?

Yes, you have to have artists that you believe in and nurture and this we’re prepared to do through good or bad.

Leaving the armory that afternoon, I couldn’t help but wonder how in some perverse way that galleries were suddenly more valuable in this down market and when the market was particularly buoyant were just aping the actions of a super chain store. Time and the quality of the next batch of work will tell us as time goes, and let’s hope that the gallery can sustain a valuable role going forward in championing discerning work and the collective human experience.