Chiromancy is the age-old art of characterization and fortunetelling through the study of the palm.  Also known as palmistry, palm-reading, or hand analysis, in today’s modern society it is generally regarded as a pseudoscience despite it’s uncanny accuracy in unveiling the many unspoken traits of a stranger.  Tracing back some 5,000 years ago to the Hindu sage Valmiki who wrote a book comprising of 567 stanzas, palm reading spread from India to China, Egypt, and the rest of the world, evolving for better and for worse.

These days, most anyone you ask regarding the subject can acknowledge that it is the lines in one’s naked palm that reveals it’s owners personality, oblivious to the fact that the shape of their hand, fingers and fingernails have just as much to do with it than their personal creases.  For example, a square hand is a sign of perseverance, practicality, punctuality, and a respect for society and the law. Where in contrast, the brutal murder’s hand can be identified by it’s thick and heavy palm, reddish in tint, broader than average with short, awkward, and stiff fingers that are generally crooked and spatula in shape. That being said, one should be wary of crooked fingers.

Being the elevated creatures that we are, we’ve taught ourselves to make and use tools such as forks and knives to define our refinement by society’s impossible standards so that we may sit at a dinner table and eat while not disturbing other guests. Personally, I enjoy eating with my fingers as one would do in India, but what do they know, they’ve only invented a millennia old technique that has spread across the world enlightening and freeing billions of minds and souls. I mean, only a savage would eat his spaghetti and meatballs with his hand, right? Well, it so happens to be their greater respect for the divinity of food itself.  According to them, one should have a personal relationship with what one is putting into one’s body.

Food is divine, and needs to be enjoyed with not only taste and smell, but also touch.  Even the Shah of Iran was so impressed with this mode of consumption that he remarked, to eat with a spoon and fork ever again would be like making love through an interpreter.  But the fact remains, we are not in an Ashram, and we are not in Kerala, we are in New York City, and we are at The House, a monumental carriage house restored into a restaurant in the affluent neighborhood of Gramercy Park.  The table is set, and it’s time to behave.

Invited by the Sean Olnowich, the chef/partner himself, who has not only shaped the menu but molded the kitchen to his liking, Scallywag’s alluring Sabrina and I hoofed into the very desolate ex-dwelling of horses for a trip though Sean’s life, culinary history, and cuisine.  As Mr. Olnowich descended to the kitchen to dictate an array of appetizers and entrees, we decided on a bottle of Verdicchio until Sean returned prompting me to ask for his recommendation in regards to what we were about to eat. 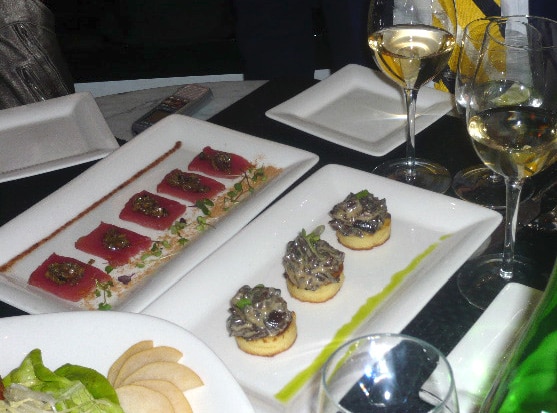 Ribolla it is then. He starts us off with the Yellowfin Tuna Crudo, The Bibb Lettuce and Endive Salad, and the Sautéed Marscapone Polenta topped with Red Wine Braised Wild Mushrooms. The trained humanity in me longed for a proper table as my long legs dangled from the high stool that I sat upon.  Meanwhile the feral beast within was being unconsciously reminded of earlier times, when eating in treetops was a necessity.  As I spread my napkin, and try the wine, Sean, in full PR mode, is spilling his scripted guts, giving us his life history with political precision. A story of “try, try again” and “never-give up”, him cooking since he was 8 years old, failed enterprises in the art world, living in LA, graduating French Culinary School, consulting in the opening of various restaurants which he still does now but I’m really here for the food, so lets get down to it, shall we?

The Yellow Fin Tuna Crudo teases with 5 slivers of fish flesh topped with a caper-olive relish and escorted by anchovy oil to the right and bottarga powder to the left. Personally, if its raw, then I love it, and such is the case with this appetizer.  I just wish that there was more, but that’s how appetizers are supposed to work, and sharing is caring so I move on to the Marscapone Polenta while Sean’s voice echo’s around, “We’ve actually had an increase in clientele these last two months.”

Despite the economy, Sean says it’s the larger restaurants that are suffering the most right now and not his small “House” while reaching for a glass of wine with one of the more common forms of hands, The Spatula.  It denotes versatility, energy, ability, and the dislike of convention. Not to be confused with the spatulate fingers of homicidal maniacs.

The polenta topped with braised wild mushrooms is thick and rich.  I spread it around the inside of my mouth and across my tongue like I’m laying asphalt for the tunnel to my stomach, giving the wine a smoother journey than it’s used to. Deliciousness, thou art mascarpone.  Mr. Olnowich points with his square finger, “I like your tie clip, it’s a revolver.”

Square fingers generally represent a down to earth quality. Such people are industrious, hard working, and very witty in earning money, analyzing everything from a business point of view.  Stubborn in nature, their approach is very much materialistic and inclined towards making a fast buck.

I ditch my fork and take a slice of asian pear from the Bibb Lettuce between my fingers.  It’s white firm flesh covered in minuscule buds like those on the wagging tongues.  Dampness enters the grooves of the print on my index finger.  The tented arch is a sign of someone who becomes deeply involved in the things they do.  They are also self-contained, repressive, sensitive, and idealistic.  I squeeze harder to release more of its juice.  What’s left of it’s life, in the palm of my hand, on the crest of my lips.  It’s crisp meat breaks between my teeth, if only I had a little silence to savor this moment.  The salad itself isn’t exactly spectacular but the ginger vinaigrette is well concocted, and doesn’t compete with the gorgonzola at all.

As the entrées arrive Sean is lightly tapping his finger on the elevated table, exposing his small and short fingernails. Such people have an extremely nervous disposition and are prone to temperamental and unpredictable behavior.  They tend to be analytical, with a tendency towards perfectionism, and can easily become intolerant of those who fail to measure up to their standards.

The Pan Roasted Skate with baby carrots, caramelized onions, and smoked pork belly jus is a little on the bland side.  Even the carrots aren’t so flavorful.  By the way, Skate, like their stingray cousins, have a slow growth rate and therefore low reproduction rate.  As a result, they have been over fished and are suffering a reduced population in many parts of the world.  But please, don’t let that stop you from ordering it and aiding in its extinction.

The “Seared Loin of Lamb with butternut squash fregula, a date almond apricot harissa jus and mint oil the second entrée we’re being treated to hits all the right notes and most surprisingly brings out a fuller flavor in the Ribolla wine that we’re having.

Now then, allow me to give you the overview.  The House has charm.  Especially if you’re on a romantic date on the top floor.  If you have to stay in on the parlor floor, stand, don’t sit.  The high tables and chairs make for uncomfortable dining even for a tall scoundrel as myself, but on the bright side, the bathroom has two entrances, one for the customers and one for the bartender.  As for downstairs, billed as the chef’s table, everyone knows that only peasants eat by the kitchen and I’d rather not imagine what it’s like to be cramped down there as servers and food runners are doing their jobs.  Primarily though, this is a neighborhood joint, and although the food is decent, the atmosphere interesting, I’m sure it’s success rests largely in the hands of the wealthy villagers of Gramercy. Or more to the point, Sean’s relationship with them.

The food is enjoyable, I would definitely come back for a taste of the Moroccan Lamb Mini Burgers, and the extensive wine list assures a perfect accompaniment of libations to whatever it is your order. As for Sean Olnowich, he’s a young master at his game, overseeing the opening of countless restaurants and closing of empty stomachs, and if nothing else his resilience is reason to give him hand.