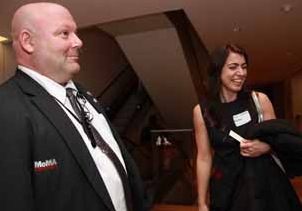 New York, where is the love? Within the great confines of our fine metropolis, some of the crudest, rawest animal instincts are bread and Big Appleites are not afraid to expose them. One sees another passing him on the sidewalk, the immediate response is to Ferrari those Gucci boots from zero to sixty in a second to pass them.  One is confronted by a herd of another species (tourists) all he itches to do is karate chop that wall through the middle. But really, where is the finish line? Where is the medal? These quick quixotic pulses keep the hot blood of New York pumping. It’s all a voracious game of irrational temptation, jealousy, desire, and lust. New York, it’s time to stop playing games, and time to start Lovin’! 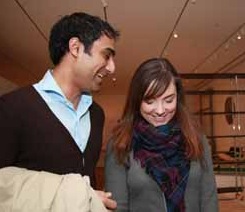 Last Monday, February 9th promised the MoMA’s Valentine’s Day themed “MoMA Monday Night” event to be filled with juicy love for all of those ready to start their romantic journey. As the curtain fell over New York, and the pregnant full moon made its way up to its prima donna heights, those locals whose animal instincts have sucked their souls into a black hole came over to fill that void with iridescent love. Spinning through the revolving entrance doors with hope that the centrifugal force would project them into an Alice in Wonderland meets Ovid’s Metamorphoses dimension, those New Yorkers slowly trickled in.

From the lobby, one could decipher the house beats spun by the DJ on the party floor. Hearts started to pound to the beat as one approached the stern MoMA FBI agents guarding the entrance between the faux Fred Sandback barriers, which have an uncanny ability to restrain those animal instincts. 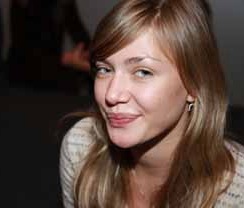 Ready to find their Daphnes and Apollos the empty souls presented their regular admission tickets. Beware, they should have been warned, the ambrosia doesn’t flow freely from fountains. Even the true “Love Potion #9” of the night that was supposed to make the spirits fly was not so free. But all the better, if there was love to be found, it wouldn’t just be a one nighty.

Now comes the real chase, “Where do I find the love?” The large Miro painting positioned above the bar seemed to send out a clue, a sort of riddle, through its amorphous symbols. Singles and amor-filled beings alike lounged on the minimalist gray cubes directly opposite the bar area.

“What brings you lovely girls here tonight?” I ask in high hopes

0. “Well, we wanted to go see a taping of the Daily Show but we couldn’t get seats! So we walked down and bumped into this party” replied Petrea Davis of Wyoming. 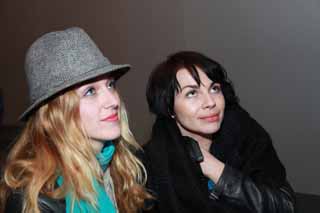 Well, some people didn’t seem to get the MoMA memo. You could tell the singles from the nots as they pulled out their blackberries in a contagious yawn domino effect fashion. The couples that knew about it would migrate upwards to the fourth and fifth floor to get their pictures taken in front of their favorite painting. The most popular one, Jason the photographer informed me, was the Jackson Pollock’s “Autumn Rhythm,” and interesting manifestation of love.

A few souls wandered upstairs by themselves following the trails of the finely dressed young vivacious couples. But instead of finding Jason, they sought the performance. Wasn’t there supposed to be a performance art of lovers rolling around in each other’s arms intertwined with almighty force that was supposed to take place upstairs? Maybe the MoMA just thought it would happen upstairs in our brains. Those without love were lost in the twilight zone.

With more vigor to find the source, I ask the MoMA supervisor Elliot, another FBI lookalike that carries a deeply charming smile on his face “Where’s the love?”

Elliot responds with a slight perplexed look “The performance art isn’t supposed to take place tonight, it’s not part of the show.”

So, after roaming around the MoMA, wishing so hard to become the lovely model in Klimt’s the Kiss, dressed in her fine mosaic silks, some of those single-ites climbed back down the stairs via the escalators. Love proved to be as hard to catch as those bubbles of champagne that had been craved downstairs. They went to the MoMA to find love, and couldn’t find it…or did they? MoMA has tricked all of us once again with this is the ultra post modern experiment. The void that was left empty throughout the soul-searching within the labyrinth of the MoMA can only make us Big Apple-ites realize as we spin back out into the frantic street our true love is New York. The fantastically animalistic New York.